What You Need to Know About Digital Currency

And how to buy it in Canada

While that kind of staggering 20x return is a rarity in stock markets, other, lesser known digital currencies generated even higher returns. Ether, the second largest cryptocurrency by market cap, had a staggering 140x return over the course of 2017.

We all know what happened next: Growth on that hyper-parabolic scale simply isn’t sustainable, and values came back to earth.

Yet the story of digital currencies is still in its opening chapter. Regulatory clarity is slowly but surely coming. Enterprise adoption of blockchain technology is accelerating. More and more institutional money is expected to enter the market, thanks to the introduction of futures and ETFs.

Given these developments, the use (and potential value) of digital currencies could grow exponentially larger in the coming years.

To help you better understand why this is occurring — and how we came to this point — let’s take a closer look at how digital currencies work, their benefits and how Canadians can easily purchase and trade cryptocurrencies. 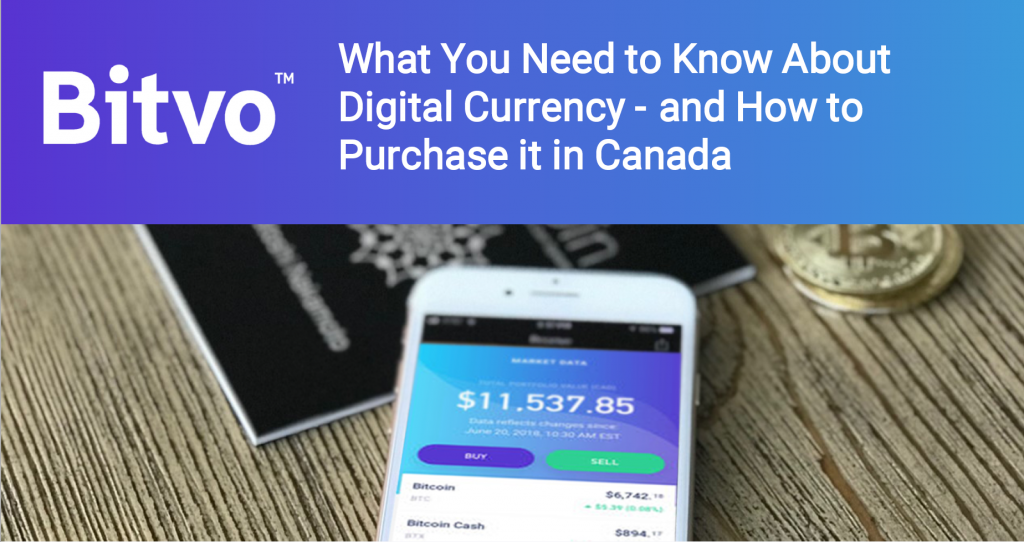 Blockchain and Bitcoin — a short history

Modern digital currencies have a fascinating backstory, and that story begins with the development of blockchain technology — a truly revolutionary idea.

A blockchain is a public digital ledger where transactions are recorded. What makes blockchain so transformational is its decentralized nature. There is no central authority or middleman keeping records or acting as a validator for transactions. Instead “miners” verify transactions by using computing power to solve cryptographic puzzles, and are rewarded with a small percentage of the transaction for their work.

Blockchain was created as a sort of internal accounting method for Bitcoin, the first widely-used digital currency. When one person sends Bitcoin to another person as payment, the transaction is publicly recorded on the Bitcoin blockchain. No bank or third party is needed to validate the transaction — everything is publicly accessible and visible on the blockchain.

In this sense, the Bitcoin blockchain contains the financial history of all the transactions that have been made with Bitcoin. Though some people believe it’s possible to hide money or evade public notice with Bitcoin, the opposite is true — every Bitcoin transaction is viewable by anyone who looks at the blockchain. It’s public, immutable and secure, due to strong cryptography.

Thanks to the creation of Bitcoin and blockchain, for the first time in history it became possible to send currency back and forth without the need for payment processors, banks and other centralized authorities.

But that’s only where the story begins.

The growth — and benefits — of digital currencies

While a momentous achievement, Bitcoin represented just the first step in the creation of digital currencies. Another milestone was the development of Ether, a blockchain-based cryptocurrency on the Ethereum blockchain, that allows for the addition of smart contracts. Now, instead of being limited to money, almost any asset (real estate, valuables, etc.) can be digitized and placed on blockchain.

Since the development of Bitcoin, thousands of other digital currency projects have been launched. Some attempt to be faster or cheaper to transact than Bitcoin. Others are seeking to bring the power of tokenized blockchains to enterprises, or to create a decentralized version of the Internet. There are also non-blockchain digital currencies that use another cutting-edge technology called directed acyclic graph.

While digital currencies offer a fast, secure means of exchanging value without a third party, that’s merely one use case. Today digital currencies are being used to help reduce fraud in supply chains. By using smart sensors, information about the origin of a product can be encoded into a secure and immutable blockchain secured with digital currency. This means that consumers can trace the path of their goods from the factory or farm all the way to their home, eliminating the odds of receiving counterfeit goods.

This represents just one example of the countless ways blockchain technology is being integrated into the world around us. As adoption of digital currencies grows, it’s likely their value will rise. And for those seeking to buy, sell and trade cryptocurrencies, it’s critically important to find the right exchange partner.

Canadians are fortunate to have a number of digital exchange options. When choosing an exchange, it’s important consider variables such as trading fees, withdrawal fees, platform features and customer service. It’s also important to consider ways to reduce risks when choosing a cryptocurrency exchange to trade on.

Digital currencies hold enormous potential for both businesses and individuals. By performing your due diligence and choosing the right exchange partner, you can help ensure that your experience with buying and selling digital currency is a positive one.

Bitvo provides Canadians with a secure, fast easy to use 24/7 digital currency exchange to buy, sell or trade Bitcoin, Ether, QCAD and XRP.