What is a Hard Fork

and How Does it Affect the Cryptocurrency Market?

If you’re a digital asset trader, you’ve likely noticed some changes with regard to Bitcoin Cash. A little more than a year ago, Bitcoin Cash was created by splitting the Bitcoin blockchain in two. Now, history has repeated, with the Bitcoin Cash chain splitting in two and a new coin, Bitcoin SV, entering the market.

If you’re not a digital currency expert, these splits can be somewhat puzzling. Are the new projects clones? Copies? Close cousins?

To help you better understand how this process works, let’s review the basics of cryptocurrency forks, and how they affect the market. 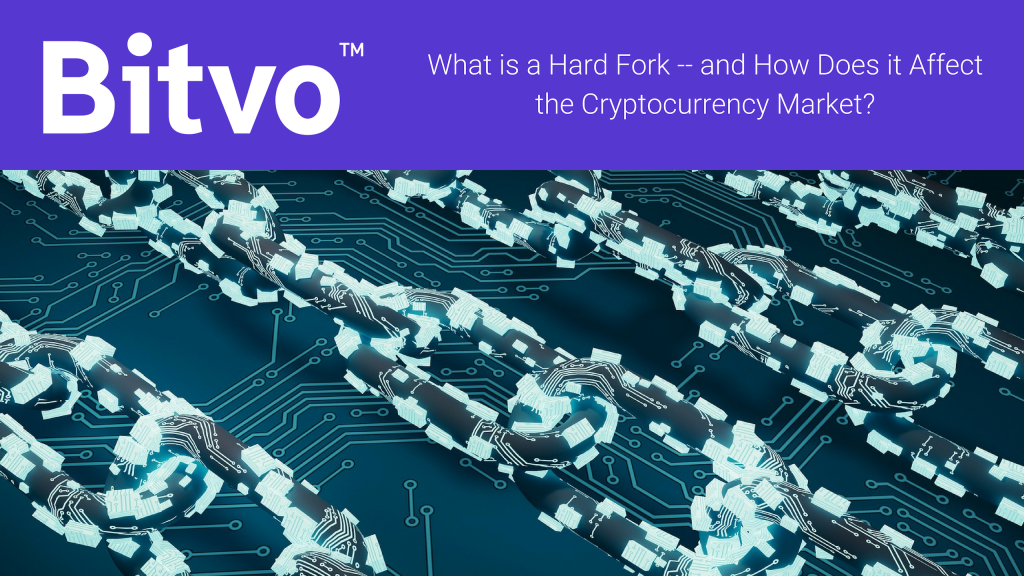 There are two types of cryptocurrency forks: Soft forks and hard forks. Both are changes to the underlying software protocol, but they differ dramatically in their effect. Soft forks are backwards-compatible changes that don’t make existing rules obsolete. Hard forks, on the other hand, are a permanent, non-backwards compatible change that results in the creation of a new version of an existing blockchain. This new version is called a “fork.”

Forks can occur for a variety of reasons. For example, a fork might be needed to incorporate new features or functionality, or to resolve security issues. In most cases, however, a fork occurs when there is a split within the development community. If one half of a coin’s community feels a significant change or update is needed, and the other half wants to maintain the status quo, a hard fork may be needed to resolve the issue. The community is agreeing to disagree.

The cryptocurrency realm has seen several high-profile examples of hard forks in action. One of the earliest was the Ethereum Classic/Ethereum split. In this case, a dispute roiled the Ethereum community following a serious hack that would have cost digital asset holders roughly $70 million. During an Initial Coin Offering (crypto’s version of an IPO) for a project called The DAO, hackers were able to exploit a DAO smart contract bug and reroute millions of dollars.

Ethereum’s developers decided to prevent the hackers from getting away with the cash by hard forking, a decision that created dissension within the community. A small faction of the Ethereum community argued that the idea of immutability (or something that cannot be changed) should take precedence over making digital asset holders whole. This group decided to stay on the original, non-hard forked blockchain, rechristening it “Ethereum Classic.”

A second example is the famous Bitcoin and Bitcoin Cash split. This fork occurred after a lengthy and contentious debate over Bitcoin’s scaling issues. Bitcoin can take between 10 and 30 minutes to validate a transaction, something that led one section of the community to propose an increase in block size to speed up the process. Others in the community, however, were firmly in favor of the status quo, fearing that larger block sizes would make Bitcoin more centralized.

This dispute resulted in the creation of Bitcoin Cash in the summer of 2017. Bitcoin Cash immediately became one of the most valuable digital assets on the market, trailing only Bitcoin and a handful of others in overall market cap.

Just a bit more than a year later, however, Bitcoin Cash itself was forked, following a disagreement between community leaders over the future of its development. This fork was also extremely contentious, and led to the creation of Bitcoin SV, which claims to more closely follow the “original vision” of Bitcoin founder Satoshi Nakamoto.

What Digital Asset Traders Need to Know About Forks

Forks are serious business, as they can introduce radical changes to a digital asset’s underlying technology and result in the creation of entirely new assets. This means that cryptocurrency traders should pay close attention when a fork appears to be imminent for any of their holdings.

Forks also draw the attention of traders because those who hold the asset being forked are generally given an equivalent amount of the new asset on a one to one basis. For example, when Bitcoin Cash forked from Bitcoin, traders who owned five Bitcoin also received five Bitcoin Cash. This process is accomplished by taking a snapshot of all wallets holding an asset about to be forked.

Hark forking often leads to significant price movement in the period directly before and after a hark fork is completed, something of which cryptocurrency traders should be cognizant.

Canadians can buy, sell and trade Bitcoin, Bitcoin Cash, Ether and QCAD on Bitvo’s secure, fast and easy to use 24/7 digital exchange platform.