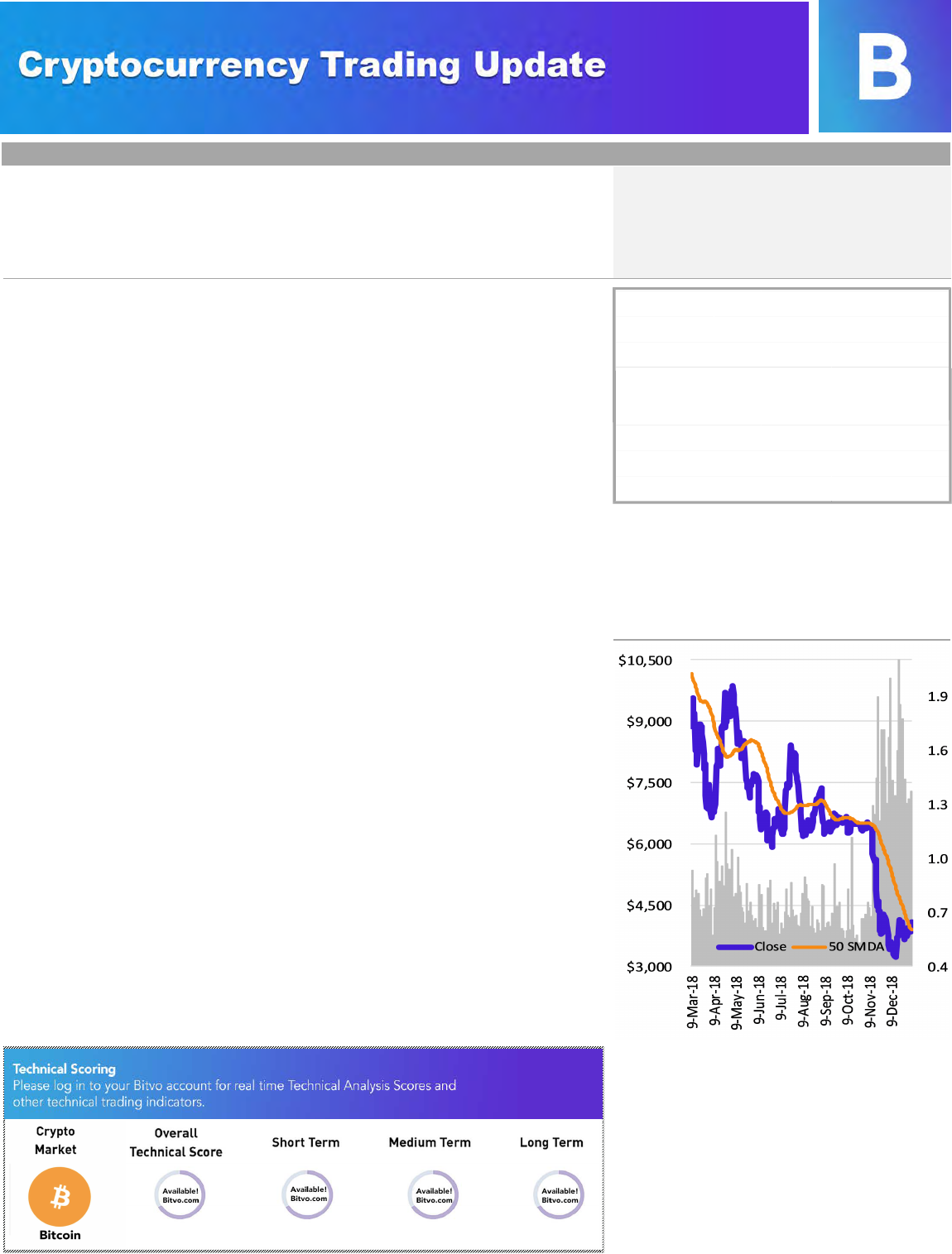 Bitvo.com
Bitcoin (BTC)
C$5,375 (US$4,046)
January 07, 12:15 pm
Shane Thomson, CFA
shane@bitvo.test
403.407.0046
Technical Trading Score*:
Date Of Inception:
2009
Primary Use:
CURRENCY
17mm
Coin Profile
Bitcoin is a decentralized coin enabling
revolutionary means to exchange value across the
globe. It continues to be the biggest and most
influential coin, encouraging peer-to-peer payment
networks powered by its users with no central or
middle authority.
Page 1 of 8
Coins Outstanding:
Maximum Coins:
21 mm
POW or POS:
WORK
Current Mining Fee (USD):
~$0.252
Website:
https://bitcoin.org
January 7, 2019
All figures in USD$, unless otherwise specified
LOG IN TO VIEW
■ General Cryptocurrency News:
• The next wave of smart phones is set to include increased crypto functionality
with the Samsung Galaxy S10 rumored to include features such as cold wallet
storage and rival HTC launching its Exodus 1 blockchain phone over the
holidays, which comes preloaded with the Brave decentralized browser and is
powered by the BAT token.
• As use cases for cryptocurrency continue to build, Facebook Inc. is said to be
developing a cryptocurrency to allow users to transfer funds via their WhatsApp
messaging app. The cryptocurrency is said to be a stablecoin pegged to the
U.S. dollar with India being the company’s first test market for the project.
• At least 15 central banks are seriously thinking about getting into cryptocurrency,
according to a recent report from the International Monetary Fund. Central
Banks site the diminishing role of cash usage, cost efficiency and financial
inclusion as primary drivers for the change.
■ BTC News:
• “Proof of Keys”, an event intended to prove exchanges operate on a full reserve
basis, essentially testing the Bitcoin solvency, took place on January 3
rd
. During
this event, users were encouraged to withdraw all BTC to private keys. Most
major exchanges passed the test; however, without all holders participating, the
test was ultimately deemed inconclusive.
• Blockchain start-up Blockstream is now streaming the entire BTC blockchain
from five satellites orbiting the Earth, meaning users around the world will no
longer need internet access to spend the cryptocurrency on everyday
transactions. The satellites also provide functionality to further support the
Lightning Network.
• Online retailer Overstock is set to become the first national company to pay its
taxes in BTC. Overstock will “pay a portion of its Ohio state business taxes in
bitcoin”. Ohio launched OhioCrypto.com in November, which allows businesses
to pay some taxes with BTC.
■ Trading History YTD:
• After a steady decline in 2018, BTC has experienced a stable to upward trend in
price to start 2019.
■ Current Environment:
• BTC’s trading range was narrow last week, ranging between US$3,710 and US
$3,940 before popping over the weekend to a high of US$4,080. At the time of
print, the coin is trading US$4,046.
• Volumes have been relatively stable at 1.3 million coins per day. 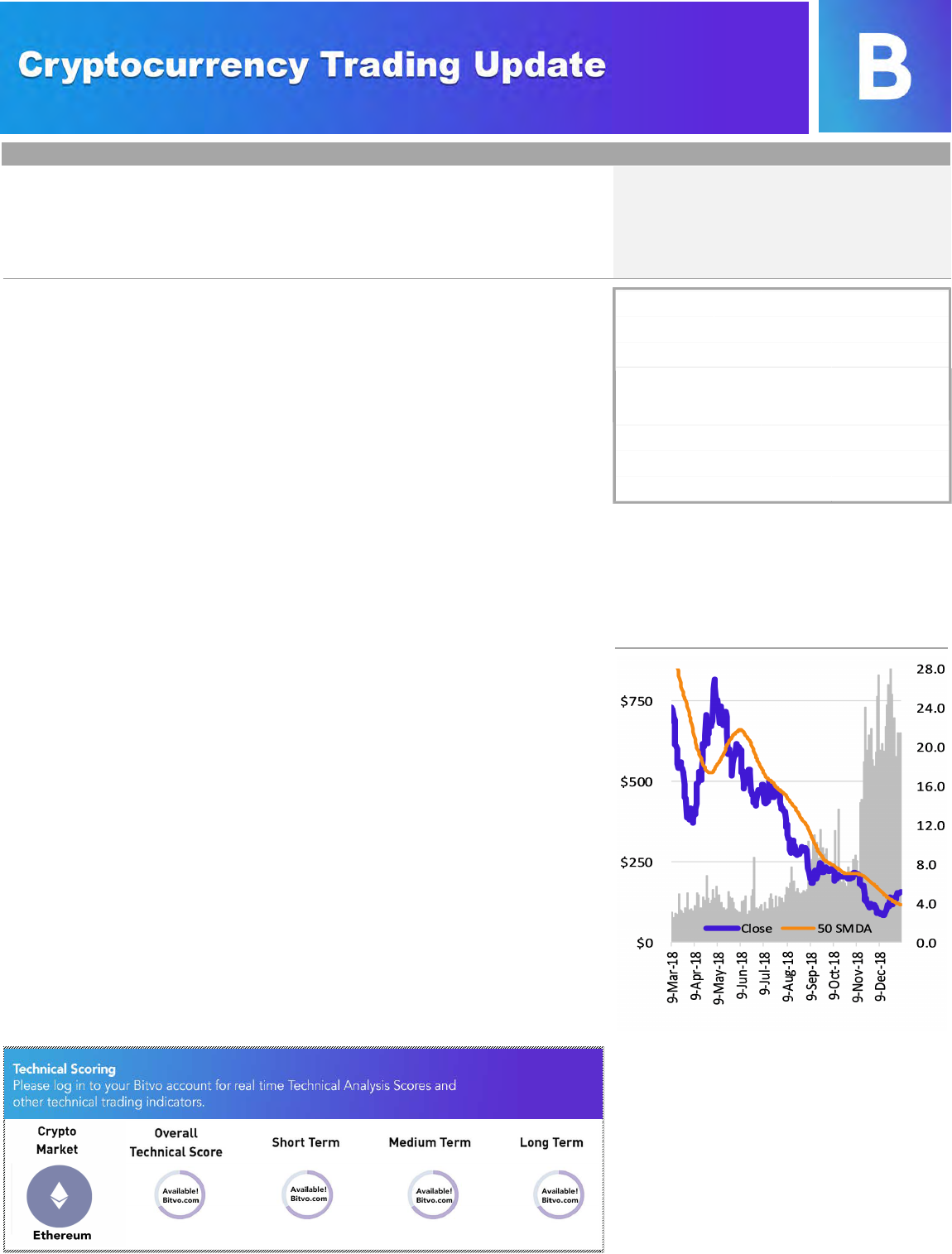 Bitvo.com
Technical Trading Score*:
Date Of Inception:
2014
Primary Use:
SMART CONTRACTS
Coins Outstanding:
100mm
Coin Profile
Ethereum is a decentralized platform that runs
smart contracts: applications that run exactly as
programmed without any possibility of downtime,
censorship, fraud or third-party interference. These
apps run on a custom built blockchain. Ether is the
cryptocurrency generated by and used on the
Ethereum platform.
Maximum Coins:
NO MAX
POW or POS:
WORK
Website:
https://www.ethereum.org/
Ether (ETH)
C$205 (US$154)
January 07, 12:15 pm
All figures in USD$, unless otherwise specified
Page 2 of 8
Shane Thomson, CFA
shane@bitvo.test
403.407.0046
~$0.083
Current Mining Fee (USD):
LOG IN TO VIEW
January 7, 2019
■ ETH News:
• Brazil state-owned bank Brazilian National Social Development Bank is set to
go live with a pilot of the BNDES stablecoin early this year. The BNDES token
runs on the Ethereum blockchain and is backed by the Brazilian real.
• Last week Ether regained second place based on market cap. XRP had original
surpassed ETH in total value for the prior few weeks.
■ Trading History YTD:
• ETH has experienced a positive start to 2019, increasing from the low US
$130’s to over US$150.
■ Current Environment:
• While more volatile than BTC last week, ETH increased on the week last week
from the low US$130’s to US$154 at time of print.
• Volumes increased on rising prices from a low of 16.0 million per day on
January 1
st
to a high of 21.4 million per day on January 5
th
before dropping
slightly to 20.5 million per day on January 6
th
. 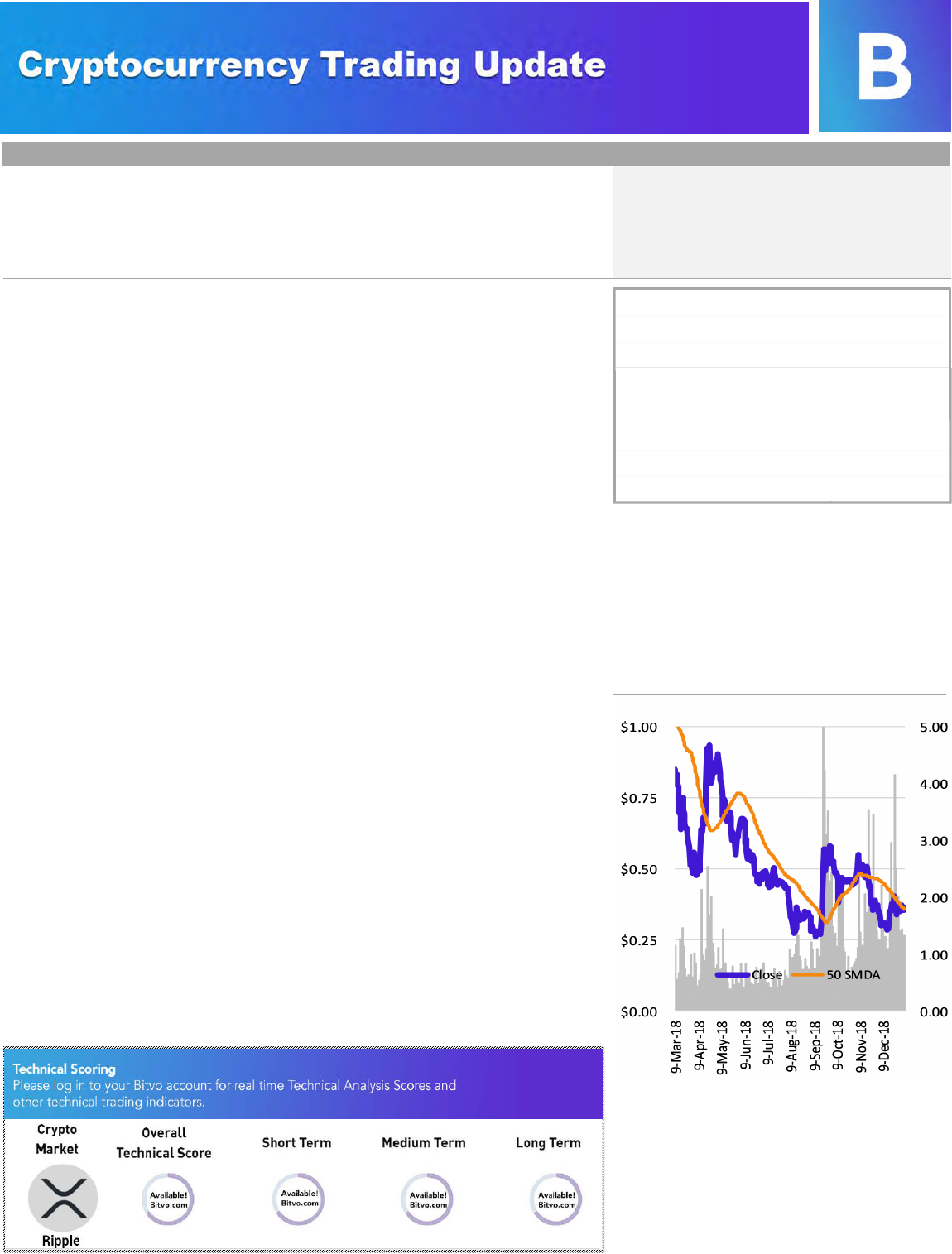 Bitvo.com
Technical Trading Score*:
Date Of Inception:
2012
Primary Use:
CURRENCY
99.99 Billion
Coin Profile
XRP is the decentralized native currency employed by
Ripple. Ripple is a settlement system, currency
exchange and remittance network created by Ripple
Labs Inc. It is built upon a distributed open source
internet protocol, and supports tokens
representing fiat currency or cryptocurrency.
The company purports to enable “secure,
instantly and nearly free global financial
transactions of any size with no chargebacks.”
Coins Outstanding:
Maximum Coins:
POW or POS:
CORRECTNESS
Website:
https://ripple.com/
Ripple (XRP)
C$0.49 (US$0.37)
January 07, 12:15 pm
All figures in USD$, unless otherwise specified
Page 3 of 8
Shane Thomson, CFA
shane@bitvo.test
403.407.0046
~$0.0003
Current Mining Fee (USD):
LOG IN TO VIEW
100 Billion
■ XRP News:
• During the “Ask me anything” session of Ripple’s Q4 2018 sit down, CEO Brad
Garlinghouse reinforced that XRP is not only independent of Ripple, but the
XRP ecosystem hosts Ripple as just one of a number of participants.
■ Trading History YTD:
• With some volatility, XRP has been relatively range bound to start 2019,
fluctuating between US$0.35 and US$0.38.
■ Current Environment:
• XRP is up on the week after spiking Saturday afternoon alongside other major
cryptocurrencies. XRP hit as high as US$0.38 before falling back to US$0.37 at
time of print.
• Volumes per day remain relatively lower on a historic basis, averaging 1.31
million per day last week.
January 7, 2019 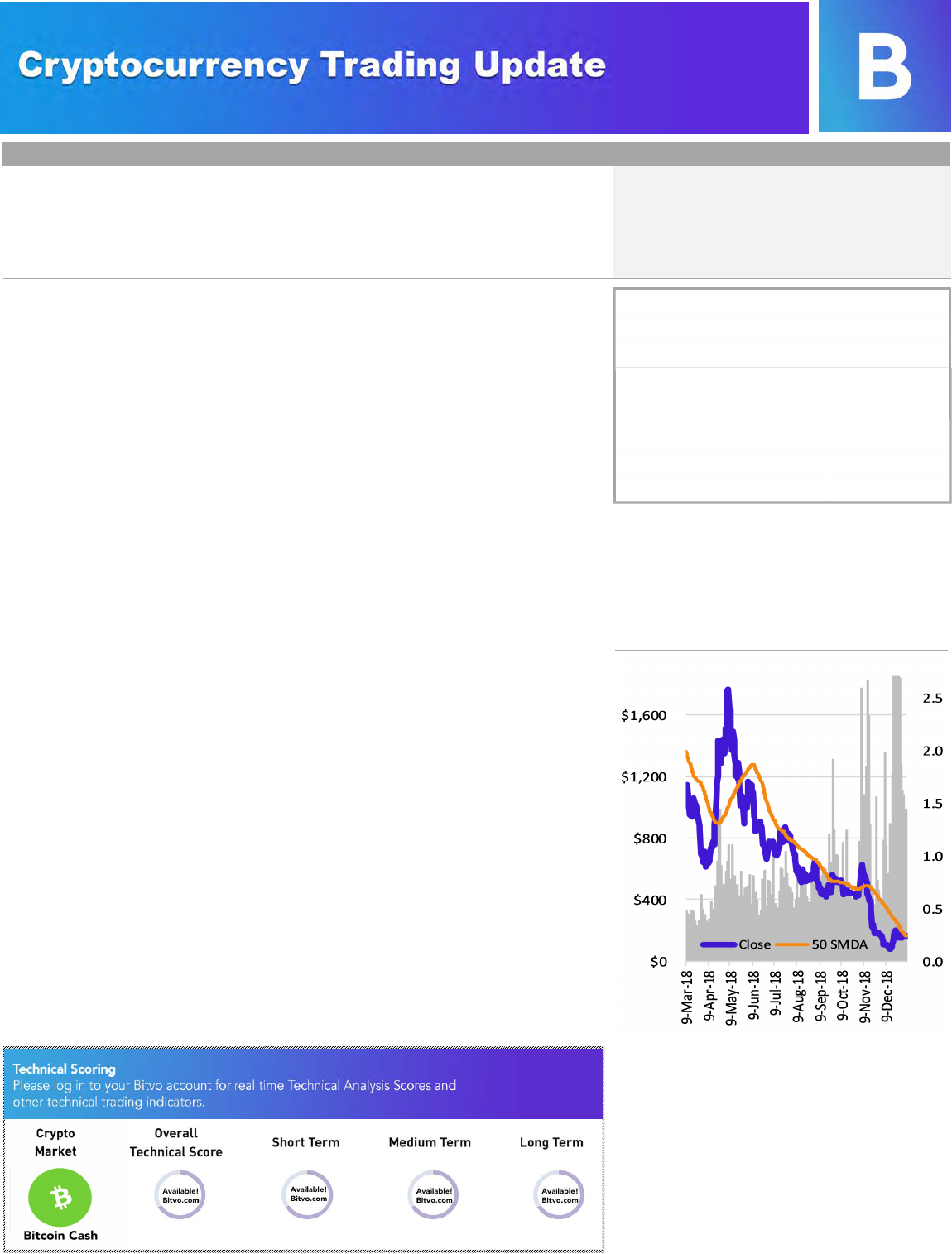 Bitvo.com
Technical Trading Score*:
Date Of Inception:
2017
Primary Use:
CURRENCY
17mm
Coin Profile
Bitcoin Cash is peer-to-peer electronic cash for
the Internet. It is fully decentralized, with no central
bank and requires no trusted third parties to operate.
Bitcoin Cash is the continuation of the Bitcoin project
as peer-to-peer digital cash. It is a fork of the Bitcoin
blockchain ledger, with upgraded consensus rules
that allow it to grow and scale.
Coins Outstanding:
Maximum Coins:
21 mm
POW or POS:
WORK
Website:
https://www.bitcoincash.org/
Bitcoin Cash (BCH)
C$215 (US$162)
January 07, 12:15 pm
All figures in USD$, unless otherwise specified
Page 4 of 8
Shane Thomson, CFA
shane@bitvo.test
403.407.0046
~$0.0015
Current Mining Fee (USD):
LOG IN TO VIEW
January 7, 2019
■ BCH News:
• No significant BCH-related news last week.
■ Trading History YTD:
• BCH has experienced a stable start to 2019, trading at US$162 January 1
st
and, with moderate fluctuation in between, remaining at approximately
these levels today.
■ Current Environment:
•
•
After hitting a high of US$175 on January 2
nd
, BCH declined over the balance
of last week to US$162 at time of print, approximately where it started the year.
Volumes also remained relatively stable, ranging between 1.2 and 1.6 million
coins per day. 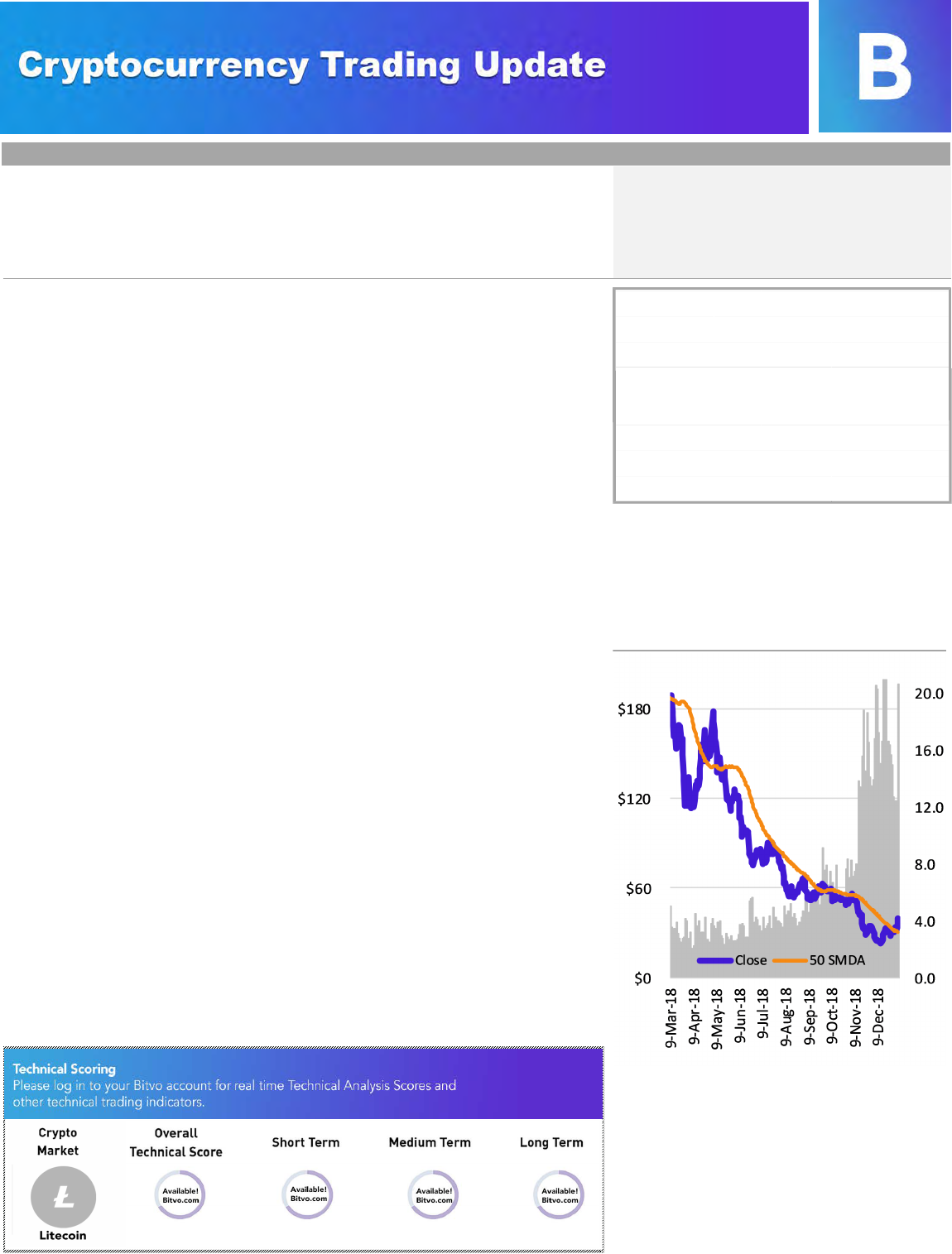 Bitvo.com
Technical Trading Score*:
Date Of Inception:
2011
Primary Use:
CURRENCY
55mm
Coin Profile
Litecoin is a peer-to-peer cryptocurrency
and open source software project released under
the MIT/X11 license. Creation and transfer of
coins is based on an open source cryptographic
protocol and is not managed by any central authority.
The coin was inspired by, and in technical details is
nearly identical to, Bitcoin.
Coins Outstanding:
Maximum Coins:
84 mm
POW or POS:
WORK
Website:
https://litecoin.com/
Litecoin (LTC)
C$50 (US$38)
January 07, 12:15 pm
All figures in USD$, unless otherwise specified
Page 5 of 8
Shane Thomson, CFA
shane@bitvo.test
403.407.0046
~$0.027
Current Mining Fee (USD):
LOG IN TO VIEW
January 7, 2019
■ LTC News:
• Litecoin outperformed other cryptocurrencies last week, likely due to the
launch of Litecoin perpetual swaps on a major global exchange.
■ Trading History YTD:
• Unlike other cryptocurrencies, which have been relatively stable to start the
year, Litecoin has experienced a steady upward trend in price as 2019 gets
underway.
■ Current Environment:
• Litecoin rose steadily this past week, opening January 1
st
at US$30.02 and
trading at US$ 38.00 at time of print.
• Volumes ranged from 11.8 million per day to 12.4 million per day to start the
year before jumping to 20.6 million over the weekend. 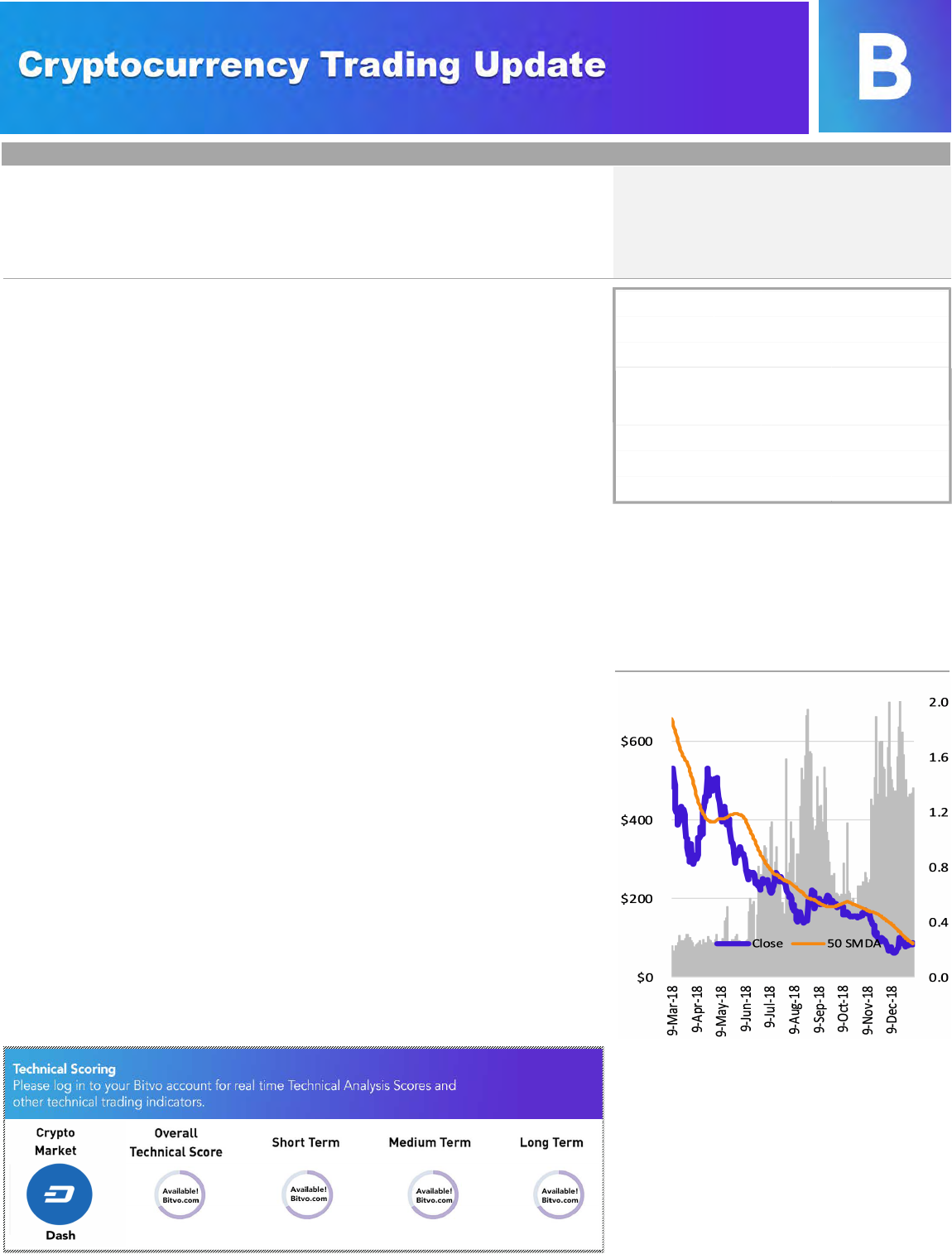 Bitvo.com
Technical Trading Score*:
Date Of Inception:
2014
Primary Use:
CURRENCY
8 mm
Coin Profile
Dash is an open source peer to peer cryptocurrency.
On top of Bitcoin’s feature set, it currently offers instant
transactions, private transactions and operates a self-
governing and self-funding model that enables the
Dash network to pay individuals and businesses to
perform work that adds value to the network. Dash’s
decentralized governance and budgeting system
makes it a decentralized autonomous organization.
Coins Outstanding:
Maximum Coins:
22 mm
POW or POS:
STAKE
Website:
https://www.dash.org/
DASH (DASH)
C$111 (US$84)
January 07, 12:15 pm
All figures in USD$, unless otherwise specified
Page 6 of 8
Shane Thomson, CFA
shane@bitvo.test
403.407.0046
~$0.0164
Current Mining Fee (USD):
LOG IN TO VIEW
January 7, 2019
■ DASH News:
• As 2019 got underway, DASH released statistics on 2018 highlighting that it
added over 4,000 merchants, growing DASH accepting merchants from
around 500 to over 4,600 last year. Over 2,500 DASH accepting merchants
reside in inflation-plagued Venezuela.
• DASH adoption is also growing quickly in Columbia where it increased to
greater than 300 merchants along with a 25% increase in active wallets. The
majority of merchants are food and drink and technology companies.
■ Trading History YTD:
• After trending negatively throughout 2018, DASH has experienced a stable to
positive start to 2019.
■ Current Environment:
• DASH price performance mirrored BTC’s last week, trending stable for
most of the week before jumping in price on Saturday afternoon. DASH
started the year at US$79.15 and is currently trading at US$83.66 at time
of print.
• Volumes have been relatively stable throughout the week, ranging from
1.1 million per day to 1.4 million per day. 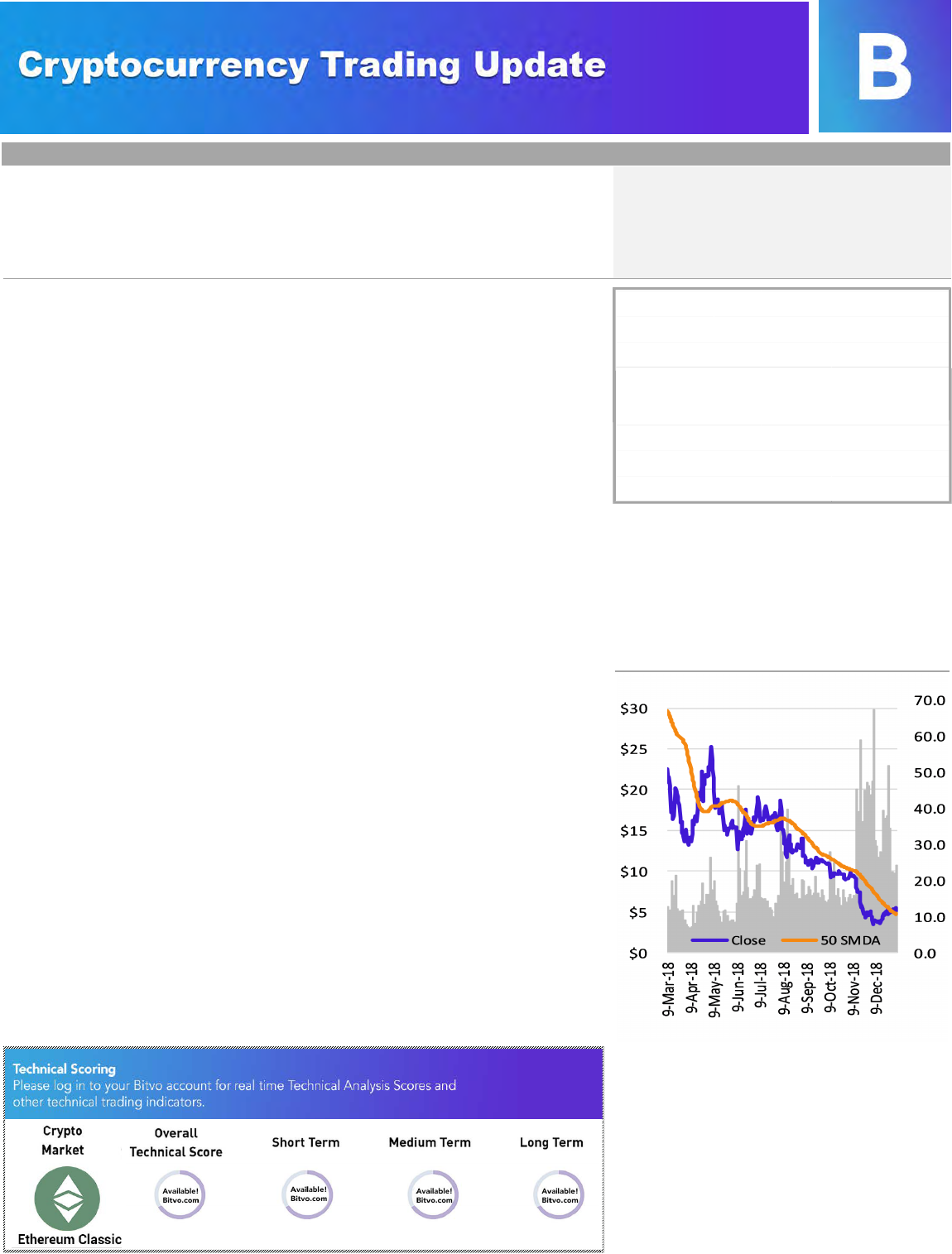 Bitvo.com
DISCLAIMER
The information contained in this report has been compiled by Bitvo (Bahamas) Inc. (“Bitvo”) from sources believed to be reliable, but
no representation or warranty, express or implied, is made by Bitvo, its affiliates or any other person as to its accuracy, completeness
or correctness. All opinions and estimates contained in this report constitute Bitvo’s judgement as of the date of this report, are
subject to change without notice and are provided in good faith but without legal responsibility. Nothing in this report constitutes legal,
accounting or tax advice or individually tailored investment advice. This material is prepared for general circulation to clients and has
been prepared without regard to the individual financial circumstances and objectives of persons who receive it. The cryptocurrencies
or services contained in this report may not be suitable for you and it is recommended that you consult an independent advisor if you
are in doubt about the suitability of such cryptocurrencies or services. This report is not an offer to sell or a solicitation of an offer to
buy any securities. Past performance is not a guide to future performance, future returns are not guaranteed, and a loss of original
capital may occur. The cryptocurrency market is volatile and rapidly changing and, as a result, the latest published reports available to
clients may not reflect recent material changes. Bitvo reports are current only as of the date set forth on the reports. This report is not,
and under no circumstances should be construed as, a solicitation to act as securities broker or dealer in any jurisdiction by any
person or company that is not legally permitted to carry on the business of a securities broker or dealer in that jurisdiction. To the full
extent permitted by law neither Bitvo nor any of its affiliates, nor any other person, accepts any liability whatsoever for any direct or
consequential loss arising from any use of this report or the information contained herein. No matter contained in this document may
be reproduced or copied by any means without the prior consent of Bitvo.
Page 8 of 8
January 7, 2019