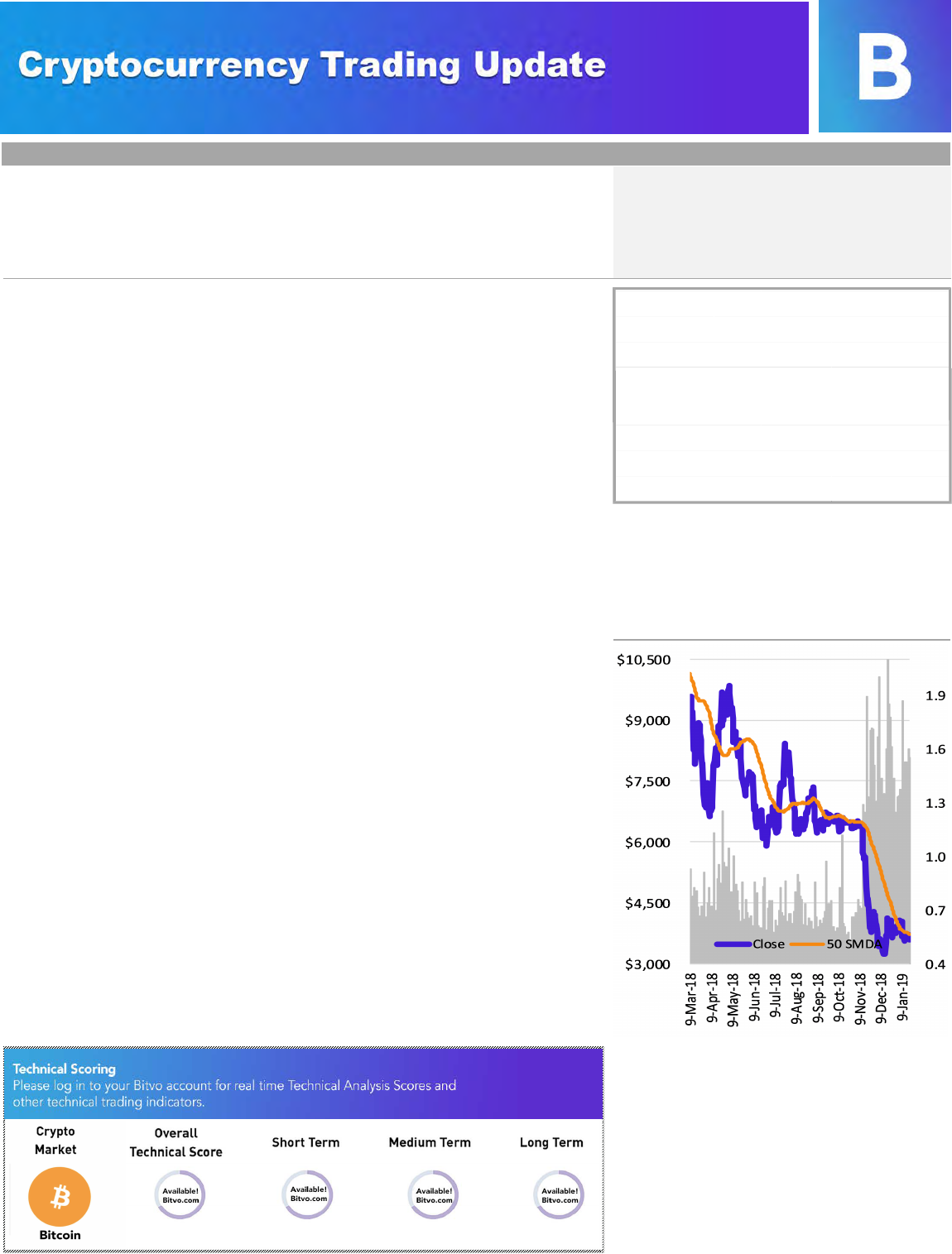 Bitvo.com
Bitcoin (BTC)
C$4,756 (US$3,578)
January 21, 1:30 pm
Shane Thomson, CFA
shane@bitvo.test
403.407.0046
Technical Trading Score*:
Date Of Inception:
2009
Primary Use:
CURRENCY
17mm
Coin Profile
Bitcoin is a decentralized coin enabling
revolutionary means to exchange value across the
globe. It continues to be the biggest and most
influential coin, encouraging peer-to-peer payment
networks powered by its users with no central or
middle authority.
Page 1 of 8
Coins Outstanding:
Maximum Coins:
21 mm
POW or POS:
WORK
Current Mining Fee (USD):
~$0.178
Website:
https://bitcoin.org
January 21, 2019
All figures in USD$, unless otherwise specified
LOG IN TO VIEW
Trading History YTD:
• After spiking to a near-term high at the end of the first week of January, BTC
dropped sharply during the second week of the year and has been
rangebound between US$3,600 and US$3,750 since.
■ Current Environment:
• While it experienced some sharp movements both up and down last week, BTC
remained relatively range bound between US$3,600 and US$3,750 last week,
trading slightly lower at US$3,578 at time of print.
• While it may still seem volatile, BTC’s price volatility is actually down 98% year
over year looking back to the third week of January 2018.
• Volumes increased last week, averaging 1.5 million coins per day.
■ General Cryptocurrency News:
• Crypto payments processor BitPay processed over $1 billion worth of
transactions in 2018. BitPay’s new customers from last year include Dish
Networks and the state of Ohio, which became the first state to allow taxes to be
paid in bitcoin.
• A group of academics led by MIT and Stanford are teaming up to create a new
digital asset called Unit-e, which aims to be a faster version of bitcoin while
maintaining decentralization.
■ BTC News:
• Advances continue in the bitcoin futures market as Bakkt makes its first
acquisition, acquiring “certain assets” belonging to Rosenthal Collings Group, an
independent futures commission merchant. The acquisition will allow Bakkt to
improve its risk management and treasury operations.
• BTC will now be available in grocery stores in the U.S. with supermarket kiosk
chain Coinstar allowing consumers to buy up to $2,500 BTC in select grocery
stores. 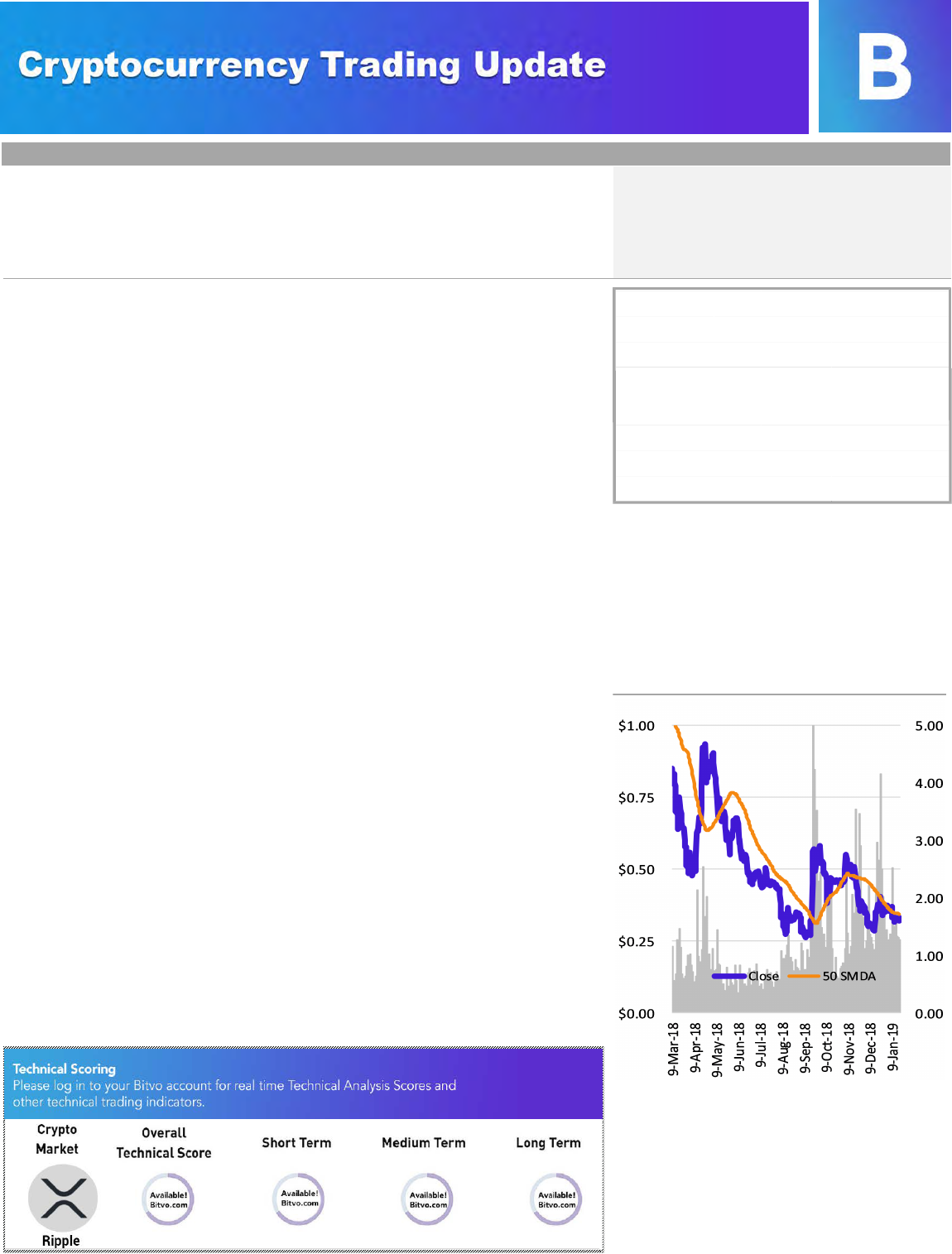 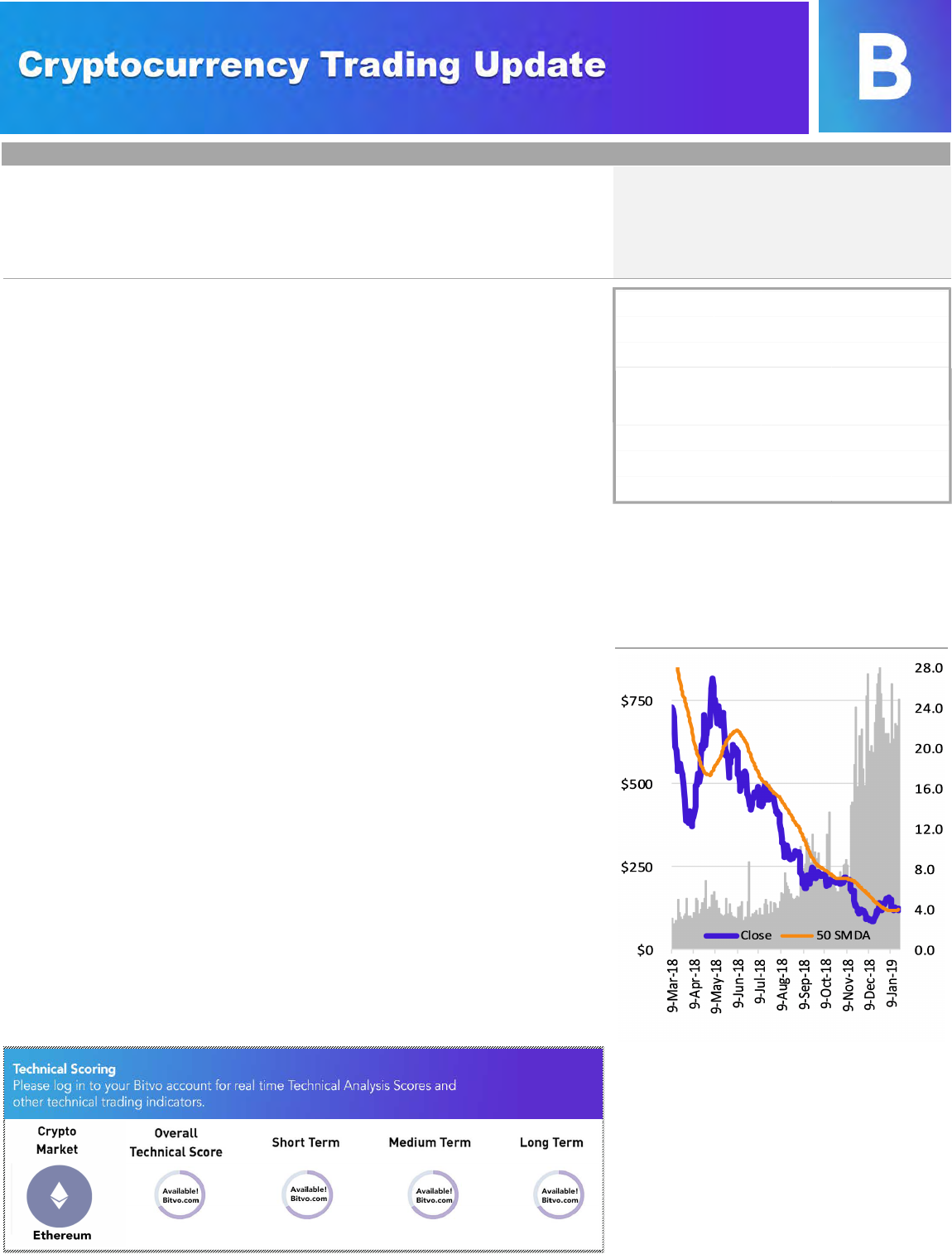 Bitvo.com
Technical Trading Score*:
Date Of Inception:
2014
Primary Use:
SMART CONTRACTS
Coins Outstanding:
104mm
Coin Profile
Ethereum is a decentralized platform that runs
smart contracts: applications that run exactly as
programmed without any possibility of downtime,
censorship, fraud or third-party interference. These
apps run on a custom built blockchain. Ether is the
cryptocurrency generated by and used on the
Ethereum platform.
Maximum Coins:
NO MAX
POW or POS:
WORK
Website:
https://www.ethereum.org/
Ether (ETH)
C$156 (US$118)
January 21, 1:30 pm
All figures in USD$, unless otherwise specified
Page 2 of 8
Shane Thomson, CFA
shane@bitvo.test
403.407.0046
~$0.069
Current Mining Fee (USD):
LOG IN TO VIEW
January 21, 2019
■ ETH News:
•
•
•
Ethereum’s much anticipated Constantinople hard fork was delayed at the last
minute last week after a security researcher discovered a bug in the software
that could have put the Ethereum blockchain at risk of attacks.
This is not the first time the upgrade has been delayed. It was originally
scheduled to go live in November 2018 but was delayed due to network bugs. A
revised estimate for timing of the fork has not yet been confirmed by the
Ethereum Foundation; however, Ethereum core developers have suggested late
February 2019.
■ Trading History YTD:
• After a positive start to the year, ETH has declined over the past two weeks,
both in USD terms as well as in relation to BTC.
■ Current Environment:
• ETH underperformed other major cryptocurrencies last week following the
further postponement of its Constantinople fork, announced Tuesday
afternoon.
• Volumes increased last week, averaging 22.2 million coins per day. 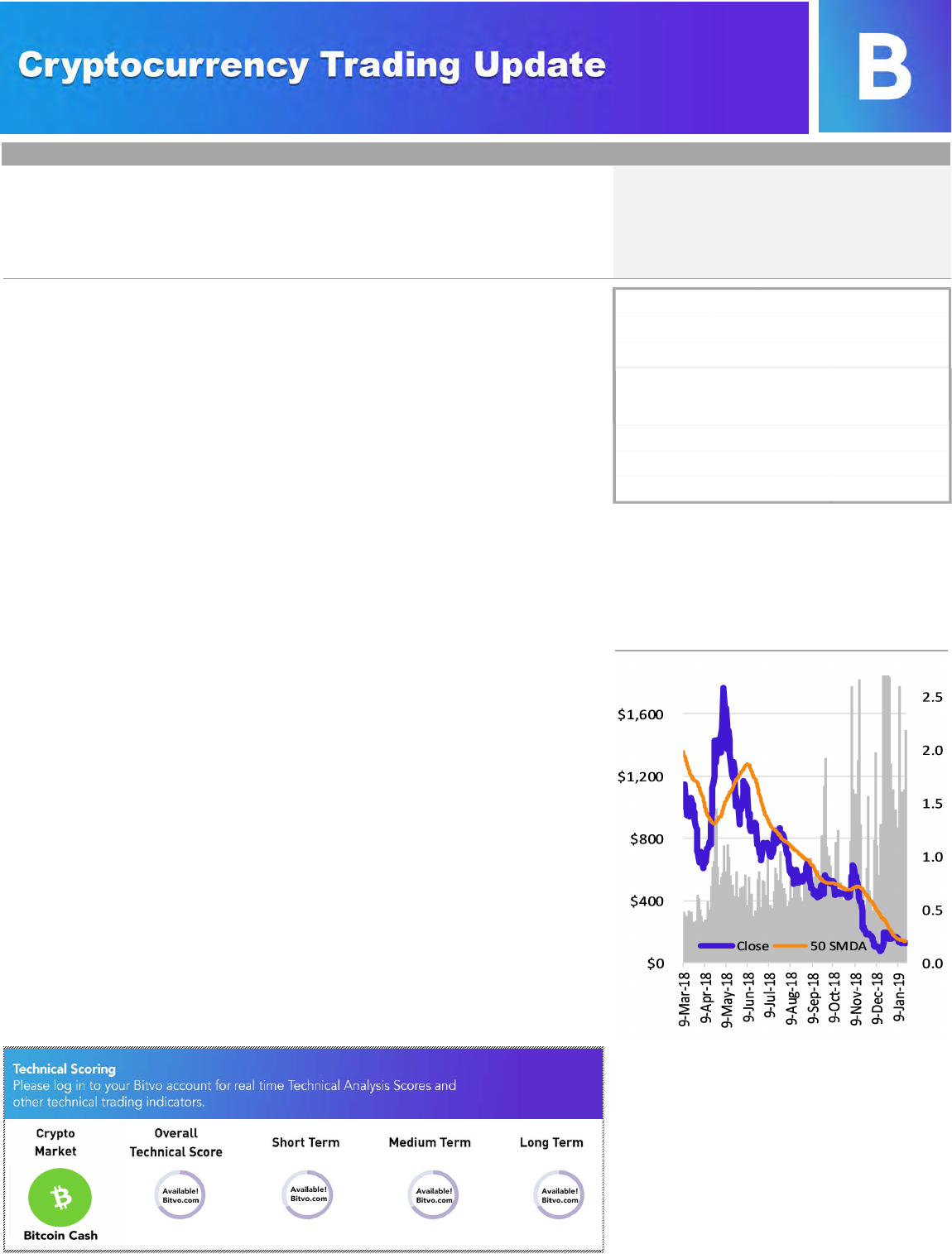 Bitvo.com
Technical Trading Score*:
Date Of Inception:
2017
Primary Use:
CURRENCY
17mm
Coin Profile
Bitcoin Cash is peer-to-peer electronic cash for
the Internet. It is fully decentralized, with no central
bank and requires no trusted third parties to operate.
Bitcoin Cash is the continuation of the Bitcoin project
as peer-to-peer digital cash. It is a fork of the Bitcoin
blockchain ledger, with upgraded consensus rules
that allow it to grow and scale.
Coins Outstanding:
Maximum Coins:
21 mm
POW or POS:
WORK
Website:
https://www.bitcoincash.org/
Bitcoin Cash (BCH)
C$163 (US$123)
January 21, 1:30 pm
All figures in USD$, unless otherwise specified
Page 4 of 8
Shane Thomson, CFA
shane@bitvo.test
403.407.0046
~$0.0047
Current Mining Fee (USD):
LOG IN TO VIEW
January 21, 2019
■ BCH News:
• No significant BCH-related news last week.
■ Trading History YTD:
• After a relatively stable start to the year, BCH saw a sharp decline in price
in week two followed by a more gradual downward trend last week.
■ Current Environment:
• BCH continued to decline in price last week, falling from US$133 to start the
week to US$123 at time of print.
• Volumes increased last week, averaging 1.6 million coins per day. 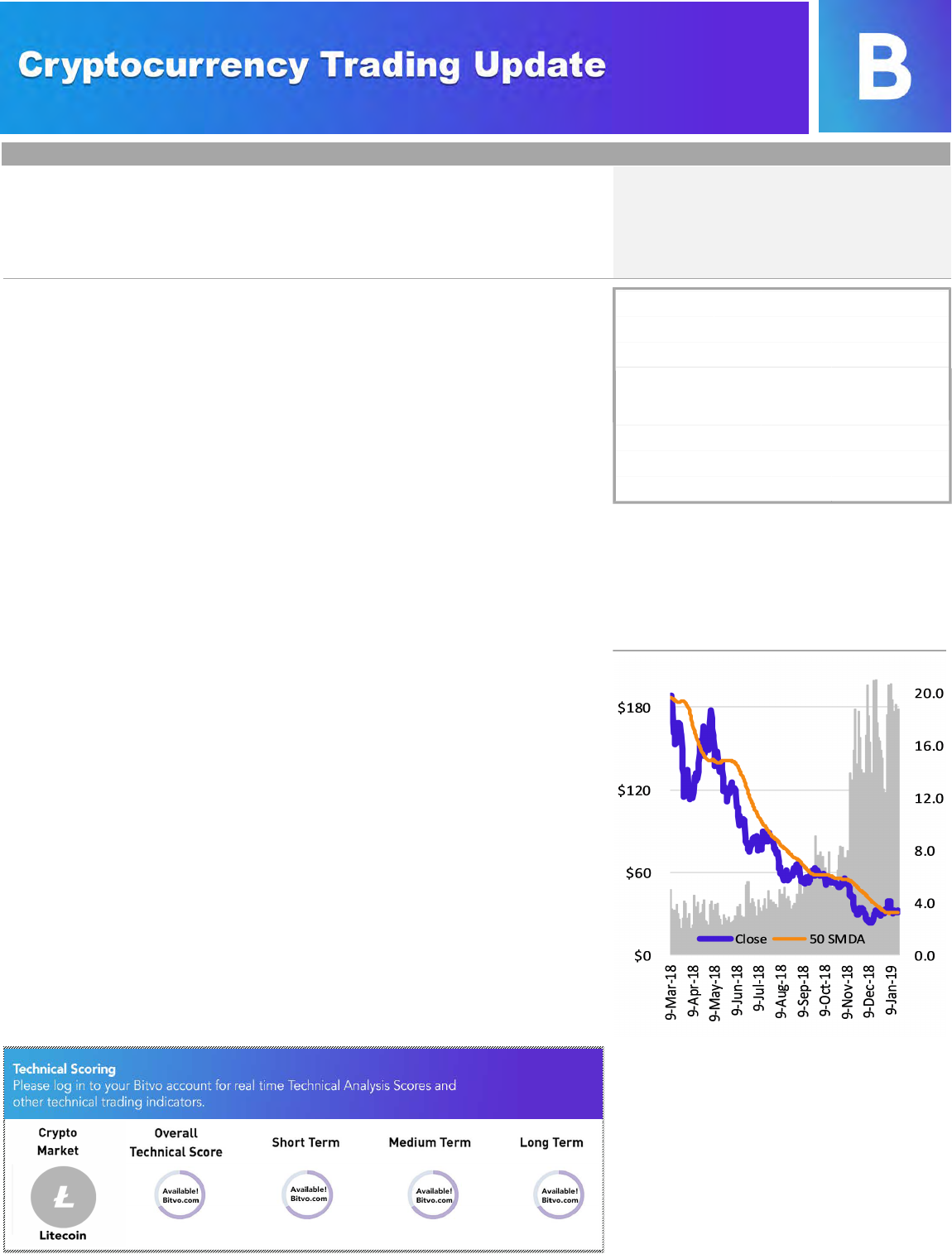 Bitvo.com
Technical Trading Score*:
Date Of Inception:
2011
Primary Use:
CURRENCY
60mm
Coin Profile
Litecoin is a peer-to-peer cryptocurrency
and open source software project released under
the MIT/X11 license. Creation and transfer of
coins is based on an open source cryptographic
protocol and is not managed by any central authority.
The coin was inspired by, and in technical details is
nearly identical to, Bitcoin.
Coins Outstanding:
Maximum Coins:
84 mm
POW or POS:
WORK
Website:
https://litecoin.com/
Litecoin (LTC)
C$41 (US$31)
January 21, 1:30 pm
All figures in USD$, unless otherwise specified
Page 5 of 8
Shane Thomson, CFA
shane@bitvo.test
403.407.0046
~$0.019
Current Mining Fee (USD):
LOG IN TO VIEW
January 21, 2019
■ LTC News:
• No significant LTC– related news last week.
■ Trading History YTD:
• LTC has been relatively less volatile than other major cryptocurrencies and
remains one of the only cryptocurrencies up on the year, opening at US
$30.46 on New Year’s Day and closing at US$31.18 last night.
■ Current Environment:
• LTC has remained relatively range bound over the past two weeks, trading
between US$31 and US$33.
• Volumes increased last week, averaging 18.0 million coins per day. 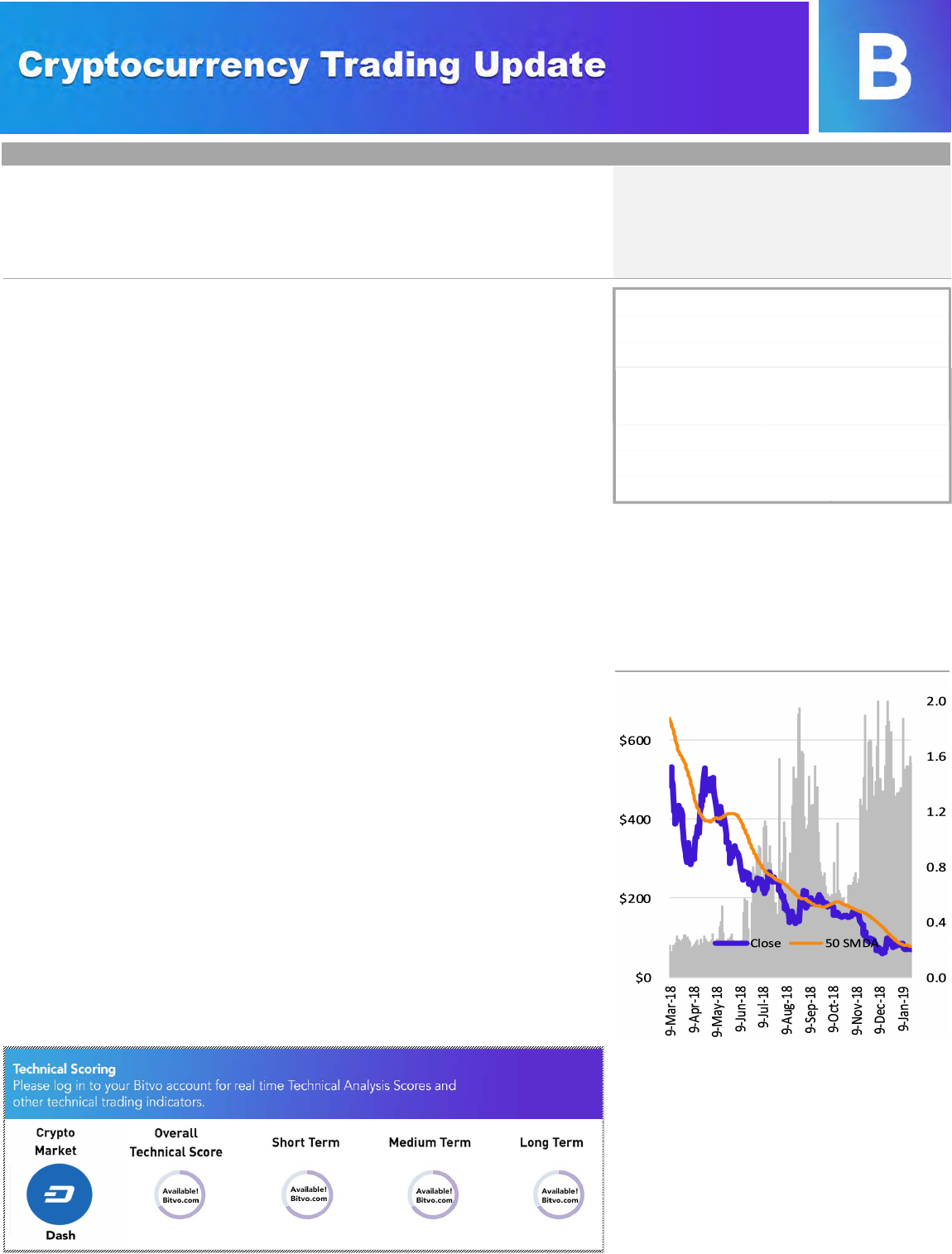 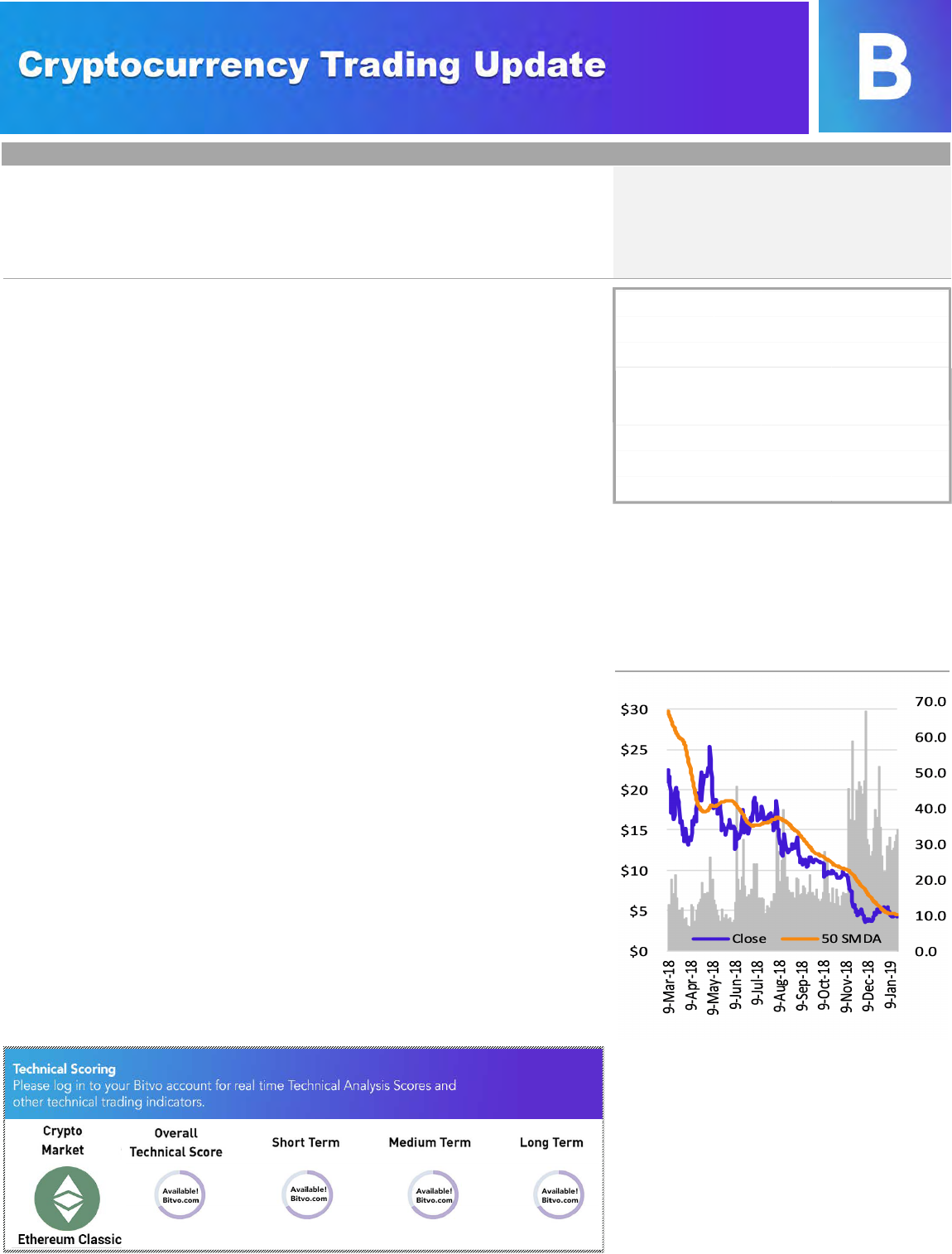 Bitvo.com
Technical Trading Score*:
Date Of Inception:
2016
Primary Use:
107 mm
Coins Outstanding:
Maximum Coins:
POW or POS:
WORK
Website:
https://ethereumclassic.org/
Ethereum Classic (ETC)
C$5.73 (US$4.31)
January 21, 1:30 pm
All figures in USD$, unless otherwise specified
Page 7 of 8
Shane Thomson, CFA
shane@bitvo.test
403.407.0046
~$0.0013
Current Mining Fee (USD):
Coin Profile
Ethereum Classic is an open-source, public,
blockchain-based distributed computing platform
featuring smart contract (scripting) functionality. It
provides a decentralized Turing-complete virtual
machine, the Ethereum Virtual Machine (EVM), which
can execute scripts using an international network of
public nodes. ETC has a value token called “ether”,
which can be transferred between participants or stored
in a cryptocurrency wallet.
LOG IN TO VIEW
NO MAX
SMART CONTRACTS
January 21, 2019
■ ETH Classic News:
• According to a blog post published on January 14, 2019, Ethereum Classic
Labs incubator has launched a new ETC development team ETC Labs
Core. This new team will work on core ETC projects, supporting the coin’s
blockchain and providing tools for decentralized application development,
mining and services.
■ Trading History YTD:
• Alongside the rest of the cryptocurrency market, ETC has experienced a
negative start to the year.
■ Current Environment:
• With some volatility both up and down last week, ETC closed down on the
week last night and is trading at US$4.31 at time of print.
• Volumes increased this week, averaging 29.6 million coins per day.

Bitvo.com
DISCLAIMER
The information contained in this report has been compiled by Bitvo Global Inc. (“Bitvo”) from sources believed to be reliable, but no
representation or warranty, express or implied, is made by Bitvo, its affiliates or any other person as to its accuracy, completeness or
correctness. All opinions and estimates contained in this report constitute Bitvo’s judgement as of the date of this report, are
subject to change without notice and are provided in good faith but without legal responsibility. Nothing in this report constitutes legal,
accounting or tax advice or individually tailored investment advice. This material is prepared for general circulation to clients and has
been prepared without regard to the individual financial circumstances and objectives of persons who receive it. The cryptocurrencies
or services contained in this report may not be suitable for you and it is recommended that you consult an independent advisor if you
are in doubt about the suitability of such cryptocurrencies or services. This report is not an offer to sell or a solicitation of an offer to
buy any securities. Past performance is not a guide to future performance, future returns are not guaranteed, and a loss of original
capital may occur. The cryptocurrency market is volatile and rapidly changing and, as a result, the latest published reports available to
clients may not reflect recent material changes. Bitvo reports are current only as of the date set forth on the reports. This report is not,
and under no circumstances should be construed as, a solicitation to act as securities broker or dealer in any jurisdiction by any
person or company that is not legally permitted to carry on the business of a securities broker or dealer in that jurisdiction. To the full
extent permitted by law neither Bitvo nor any of its affiliates, nor any other person, accepts any liability whatsoever for any direct or
consequential loss arising from any use of this report or the information contained herein. No matter contained in this document may
be reproduced or copied by any means without the prior consent of Bitvo.
Page 8 of 8
January 21, 2019