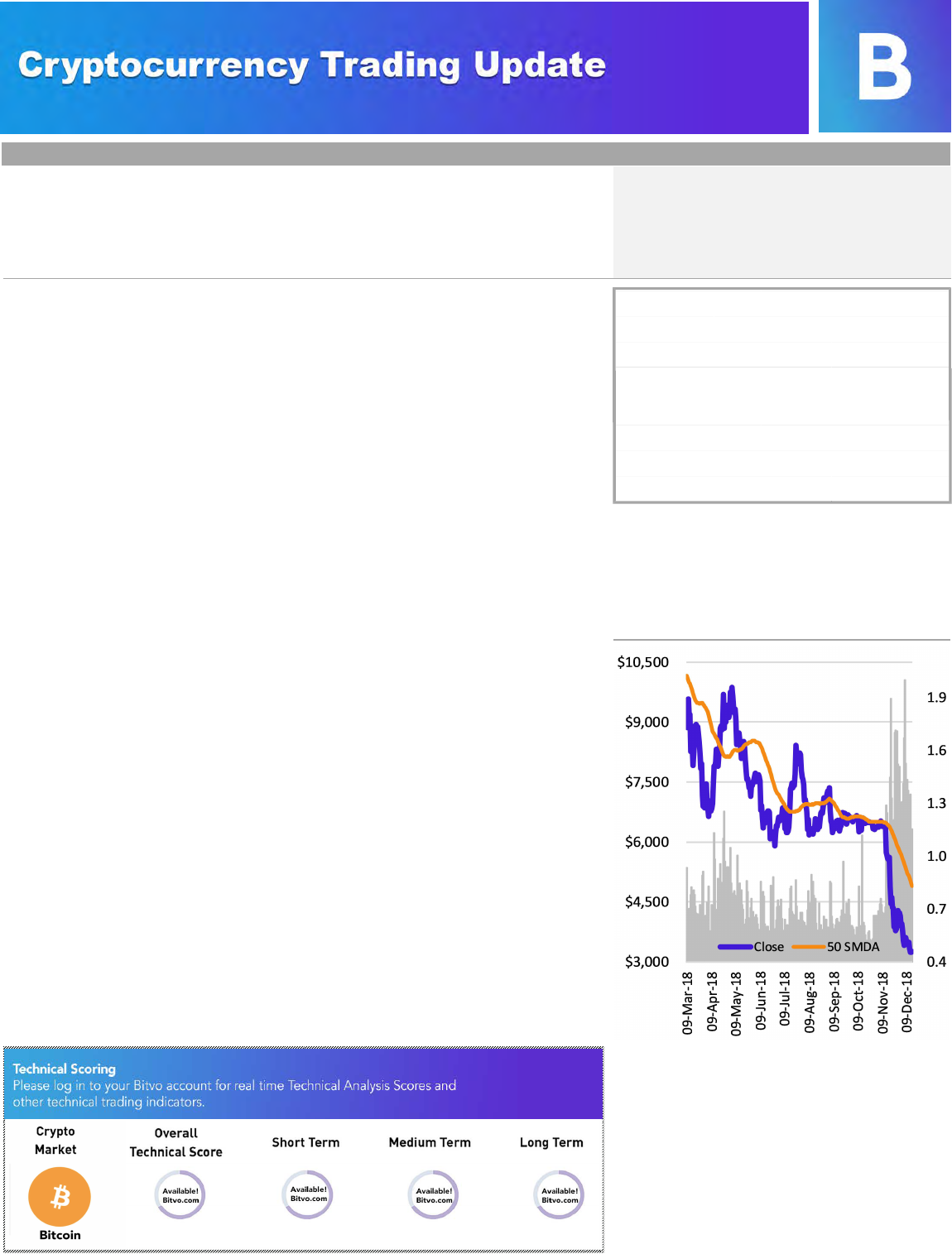 Bitvo.com
Bitcoin (BTC)
C$4,742 (US$3,539)
December 17, 3:15 pm
Shane Thomson, CFA
shane@bitvo.test
403.407.0046
Brett Thiessen
brett@bitvo.test
587.315.6608
Technical Trading Score*:
Date Of Inception:
2009
Primary Use:
CURRENCY
17mm
Coin Profile
Bitcoin is a decentralized coin enabling
revolutionary means to exchange value across the
globe. It continues to be the biggest and most
influential coin, encouraging peer-to-peer payment
networks powered by its users with no central or
middle authority.
Page 1 of 8
Coins Outstanding:
Maximum Coins:
21 mm
POW or POS:
WORK
Current Mining Fee (USD):
~$0.216
Website:
https://bitcoin.org
December 17, 2018
All figures in USD$, unless otherwise specified
LOG IN TO VIEW
■ General Cryptocurrency News:
• Calgary, Alberta, Canada has become the first city in Canada to launch its own
digital currency. The currency will be called the ‘Calgary Dollar’ and will be able
to be used through a downloaded smartphone app and will be legal tender
where accepted in the city.
• According to a new report by the Cambridge Centre for Alternative Finance, the
number of worldwide ID-verified cryptocurrency users has nearly doubled this
year, increasing from 18 to 35 million. The research further notes that “most
users are likely still speculators and long-term investors”.
• Local French news outlet, Les Echos, is reporting that the French government is
currently putting forward proposals to spend €500 million on state-level
blockchain deployments over the next three years; the efforts are largely
centered on two members of parliament that are pushing to make France a
‘Blockchain Nation’.
• Dutch lawmakers have announced that Cryptocurrency service providers
operating within the country will soon be required to obtain a license from the
central bank of the Netherlands. The measures are being taken to “prevent
such cryptocurrencies being used to launder money obtained through crime or
to fund terrorism.” Qualified license holders will be required to have much
deeper know your client (KYC) procedures in place in addition to increased
reporting of unusual transactions.
• In a similar capacity, Spain’s ruling party, the Partido Popular, announced it will
introduce draft legislation on cryptocurrencies within the next week. The
announcement was done in conjunction with the opening ceremony of the ISDE
Blockchain Law and Research centre in Madrid.
■ BTC News:
• New Google search data shows that the phrase ‘What is Bitcoin?’ was the most
popular search term during 2018 in the United States and the United Kingdom.
■ Trading History YTD:
• BTC reached all-time highs at the end of 2017 and has since declined for most
of 2018.
■ Current Environment:
• BTC sold off early in the week to make a new short-term low of US$3,156
before rallying slightly later in the week.
• Volumes fell this past week as the average coins traded per day was 1.2 million. 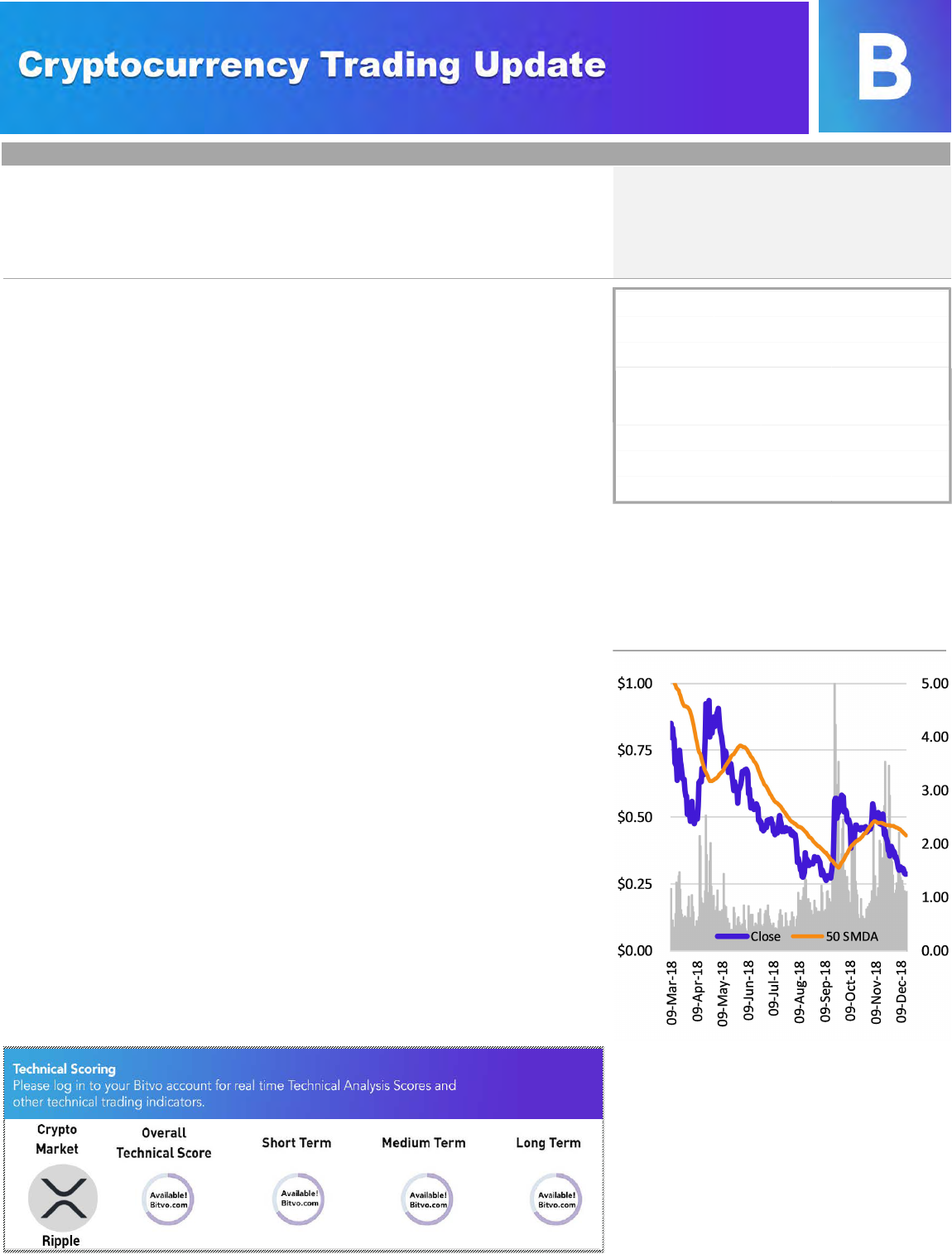 Bitvo.com
Technical Trading Score*:
Date Of Inception:
2012
Primary Use:
CURRENCY
99.99 Billion
Coin Profile
Ripple is a settlement system, currency exchange and
remittance network created by Ripple Labs Inc. It is built
upon a distributed open source internet protocol, and
supports tokens representing fiat currency or
cryptocurrency. The company purports to enable
“secure, instantly and nearly free global financial
transactions of any size with no chargebacks.”
Coins Outstanding:
Maximum Coins:
POW or POS:
CORRECTNESS
Website:
https://ripple.com/
Ripple (XRP)
C$0.41 (US$0.31)
December 17, 3:15 pm
All figures in USD$, unless otherwise specified
Page 2 of 8
Shane Thomson, CFA
shane@bitvo.test
403.407.0046
Brett Thiessen
brett@bitvo.test
587.315.6608
~$0.0003
Current Mining Fee (USD):
LOG IN TO VIEW
100 Billion
■ XRP News:
• No significant XRP-related news.
■ Trading History YTD:
• XRP sustained a parabolic rise like the rest of the space at the end of 2017 and
has since fallen back to pre-December levels. Along the way, sharp rallies have
occurred only to sell back to trend.
■ Current Environment:
• XRP sold off early in the week to make a new short-term low of US$0.28.
• Volumes remained lower this week as coins traded per day averaged 1.12
billion.
December 17, 2018 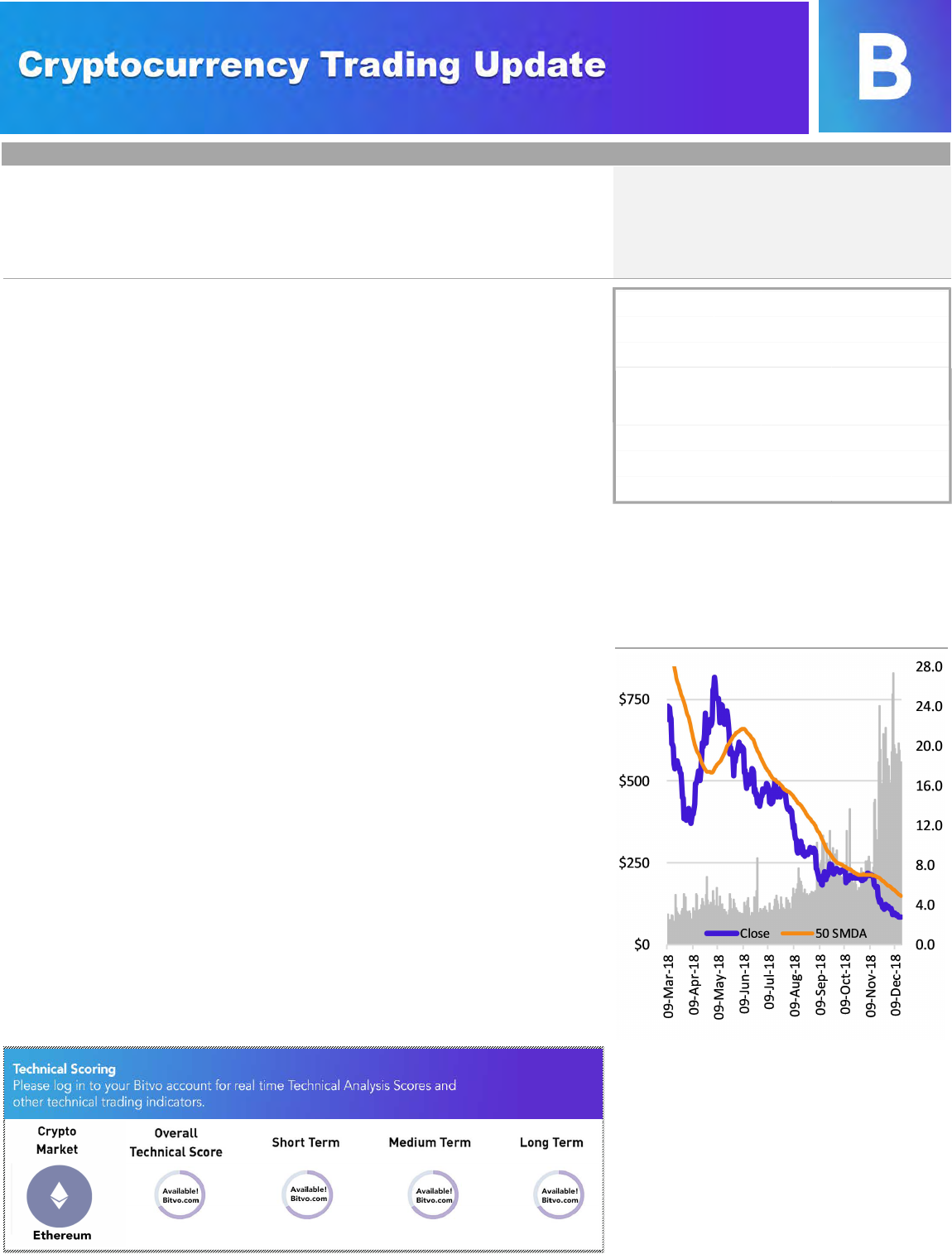 Bitvo.com
Technical Trading Score*:
Date Of Inception:
2014
Primary Use:
SMART CONTRACTS
Coins Outstanding:
100mm
Coin Profile
Ethereum is a decentralized platform that runs
smart contracts: applications that run exactly as
programmed without any possibility of downtime,
censorship, fraud or third-party interference. These
apps run on a custom built blockchain. Ether is the
cryptocurrency generated by and used on the
Ethereum platform.
Maximum Coins:
NO MAX
POW or POS:
WORK
Website:
https://www.ethereum.org/
Ether (ETH)
C$127 (US$95)
December 17, 3:15 pm
All figures in USD$, unless otherwise specified
Page 3 of 8
Shane Thomson, CFA
shane@bitvo.test
403.407.0046
Brett Thiessen
brett@bitvo.test
587.315.6608
~$0.0521
Current Mining Fee (USD):
LOG IN TO VIEW
December 17, 2018
■ ETH News:
• Hacks on ETH holdings have continued to rise despite the recent fall in price
below US$100. Cybercrime monitoring company Bad Packets LLC noted that it
has continued to see a consistent rise in malicious parties attempting to steal
funds from investors and miners alike. Such hackers look to identify mining rigs
or large wallet holdings with an exposed port 8545, which allows for gains of
control.
• Looking into the future, Ethereum co-founder Vitalik Buterin, announced that he
believed future blockchains with sharding based on proof-of-stake (PoS) will be
“thousands of times more efficient”. He believes that as scalability advances
(fees fall) and user experience gets better, non-financial applications will
become “a bigger part of the story.”
• The Commodities Futures Trading Commission (CFTC) has expressed further
interest in understanding Ethereum and the market/technology behind it. Early
last week the commission published a Request for Input (RFI) and is looking for
public feedback on a wide range of questions pertaining to the ERC 20
framework blockchain.
■ Trading History YTD:
• Despite rallying aggressively in April 2018, ETH has continued to fall during the
remainder of 2018. Small plateaus have consistently broken lower on high
volume.
■ Current Environment:
• ETH sold-off early in the week to revisit its short-term low of US$81.91;
however, it has rallied since to the mid-90’s.
• Volumes fell last week as coins traded per day averaged 18.7 million. 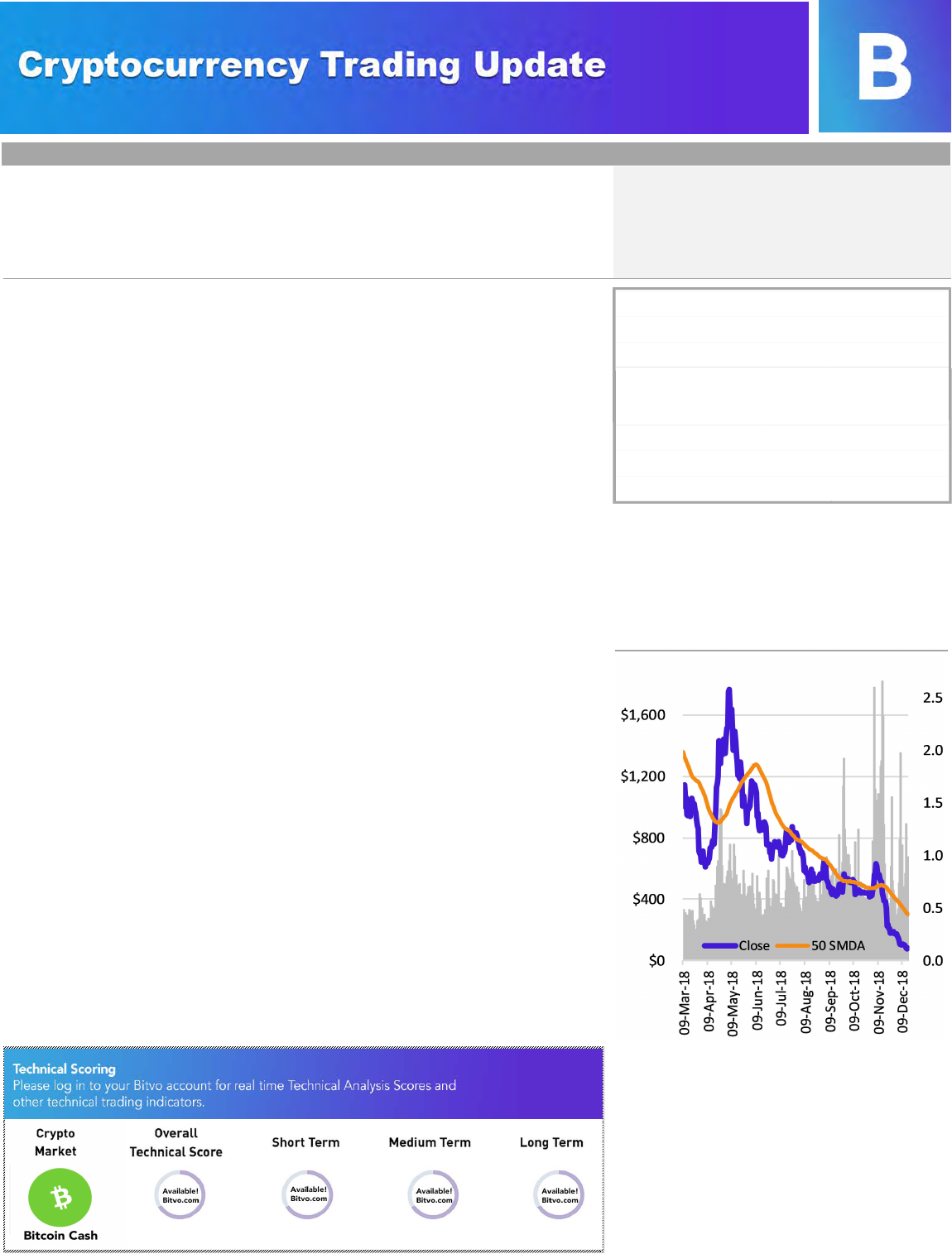 Bitvo.com
Technical Trading Score*:
Date Of Inception:
2017
Primary Use:
CURRENCY
17mm
Coin Profile
Bitcoin Cash is peer-to-peer electronic cash for
the Internet. It is fully decentralized, with no central
bank and requires no trusted third parties to operate.
Bitcoin Cash is the continuation of the Bitcoin project
as peer-to-peer digital cash. It is a fork of the Bitcoin
blockchain ledger, with upgraded consensus rules
that allow it to grow and scale.
Coins Outstanding:
Maximum Coins:
21 mm
POW or POS:
WORK
Website:
https://www.bitcoincash.org/
Bitcoin Cash (BCH)
C$121 (US$91)
December 17, 3:15 pm
All figures in USD$, unless otherwise specified
Page 4 of 8
Shane Thomson, CFA
shane@bitvo.test
403.407.0046
Brett Thiessen
brett@bitvo.test
587.315.6608
~$0.0016
Current Mining Fee (USD):
LOG IN TO VIEW
December 17, 2018
■ BCH News:
• No significant BCH-related news.
■ Trading History YTD:
• After rallying throughout May, BCH has ground slowly downward alongside the
general cryptocurrency markets for the balance of 2018.
■ Current Environment:
• BCH sold off during the week to make a new short-term low of US$73.55.
• Volumes fell off as coins traded averaged 0.9 million per day during the week. 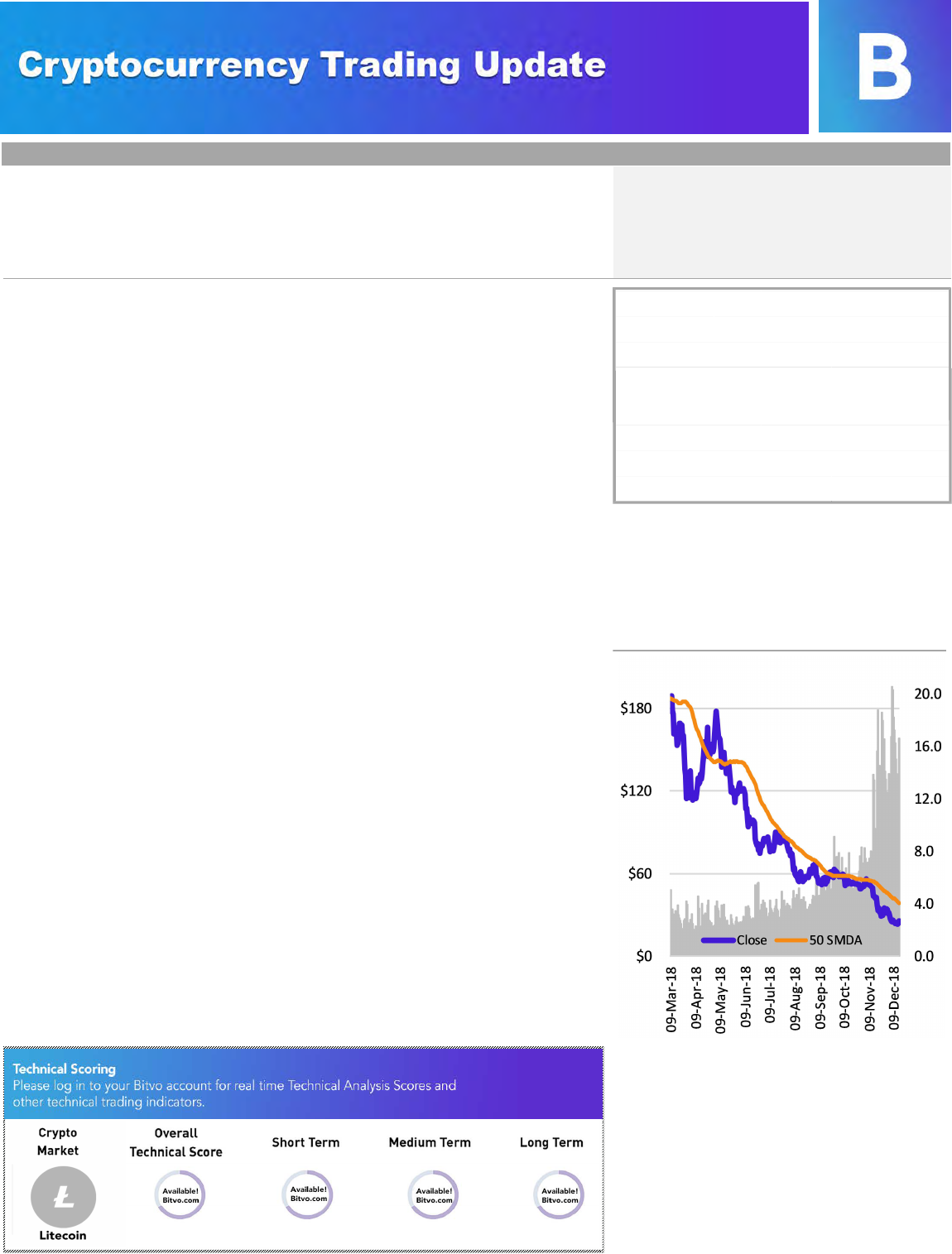 Bitvo.com
Technical Trading Score*:
Date Of Inception:
2011
Primary Use:
CURRENCY
55mm
Coin Profile
Litecoin is a peer-to-peer cryptocurrency
and open source software project released under
the MIT/X11 license. Creation and transfer of
coins is based on an open source cryptographic
protocol and is not managed by any central authority.
The coin was inspired by, and in technical details is
nearly identical to, Bitcoin.
Coins Outstanding:
Maximum Coins:
84 mm
POW or POS:
WORK
Website:
https://litecoin.com/
Litecoin (LTC)
C$39 (US$29)
December 17, 3:15 pm
All figures in USD$, unless otherwise specified
Page 5 of 8
Shane Thomson, CFA
shane@bitvo.test
403.407.0046
Brett Thiessen
brett@bitvo.test
587.315.6608
~$0.018
Current Mining Fee (USD):
LOG IN TO VIEW
December 17, 2018
■ LTC News:
• No significant LTC-related news.
■ Trading History YTD:
• Since December 2017 which saw LTC rally more than 400%, the price of LTC
has steadily declined throughout 2018. Some counterrallies have been seen
since then, but nothing that has broken the descending triangle formation.
• Volumes have started to rise in LTC after stabilizing at four million coins traded
per day.
■ Current Environment:
• LTC sustained a rally this week to hit a new short-term high of US$29.80.
• Volumes remained elevated this past week as coins traded per day averaged
15 million. 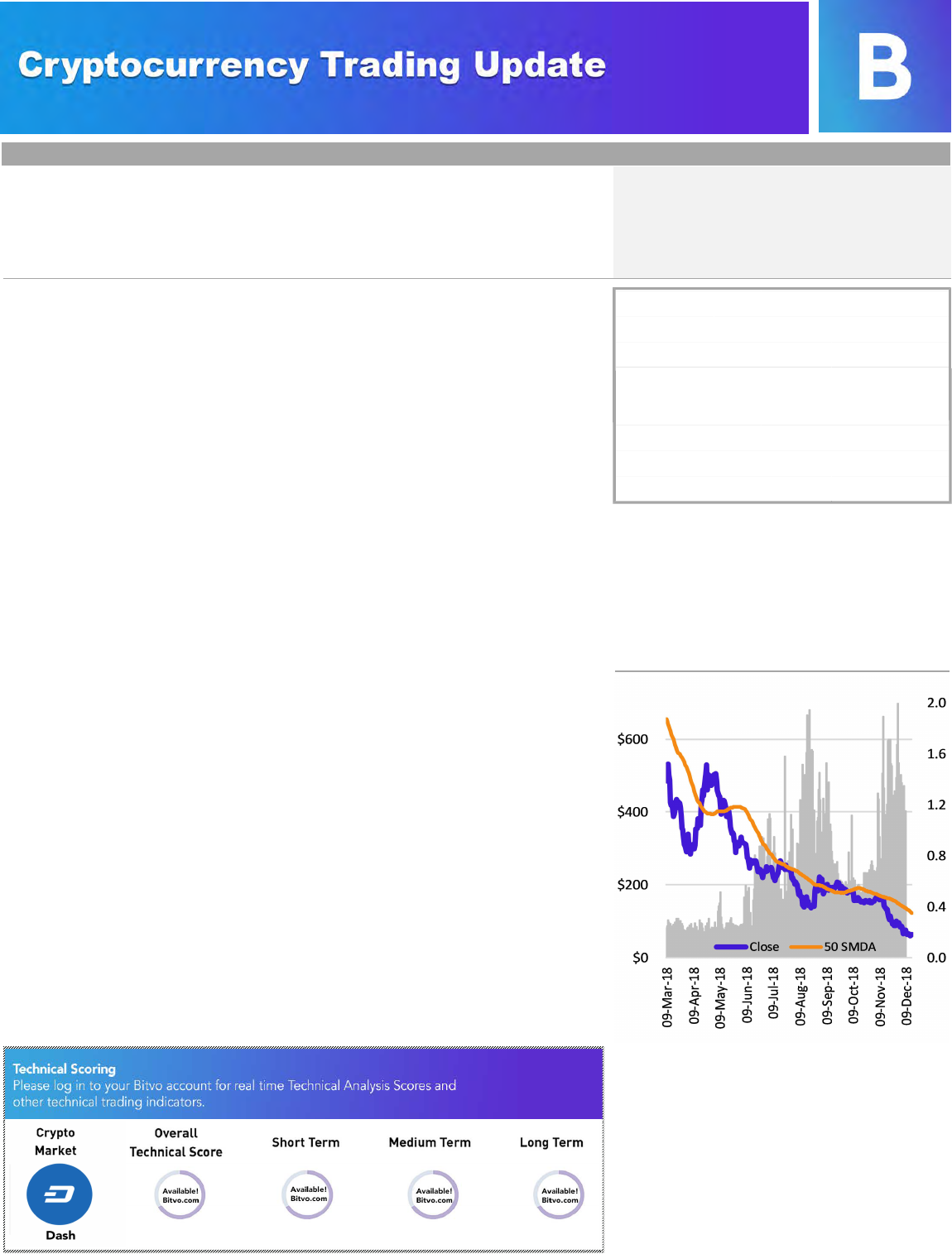 Bitvo.com
Technical Trading Score*:
Date Of Inception:
2014
Primary Use:
CURRENCY
8 mm
Coin Profile
Dash is an open source peer to peer cryptocurrency.
On top of Bitcoin’s feature set, it currently offers instant
transactions, private transactions and operates a self-
governing and self-funding model that enables the
Dash network to pay individuals and businesses to
perform work that adds value to the network. Dash’s
decentralized governance and budgeting system
makes it a decentralized autonomous organization.
Coins Outstanding:
Maximum Coins:
22 mm
POW or POS:
STAKE
Website:
https://www.dash.org/
DASH (DASH)
C$95 (US$71)
December 17, 3:15 pm
All figures in USD$, unless otherwise specified
Page 6 of 8
Shane Thomson, CFA
shane@bitvo.test
403.407.0046
Brett Thiessen
brett@bitvo.test
587.315.6608
~$0.0241
Current Mining Fee (USD):
LOG IN TO VIEW
December 17, 2018
■ DASH News:
• KFC Venezuela and DASH Merchants – Venezuela have started discussing
the implementation of crypto-related DASH testing in its stores; however, no
plans have been finalized and the organizations have dismissed current plans
as ready to be implemented.
• Church’s Chicken Venezuela announced that it has now integrated DASH
acceptance into 10 of the 13 local franchises within the country. A
spokesperson for the company noted that the integrations represents the
growing confidence in DASH as an emerging payment model.
■ Trading History YTD:
• The price of DASH has trended negatively over the past year despite various
counterrallies and a recent rise in volume due to increased adoption.
• Market participants have attributed this year’s decline to sentiment in the
overall crypto markets as well as the coin more than quadrupling in price
during late 2017.
■ Current Environment:
• DASH sold off during the week to make a new short-term low of US$58.45.
• Volumes fell as coins traded per day averaged 1.3 million per day. 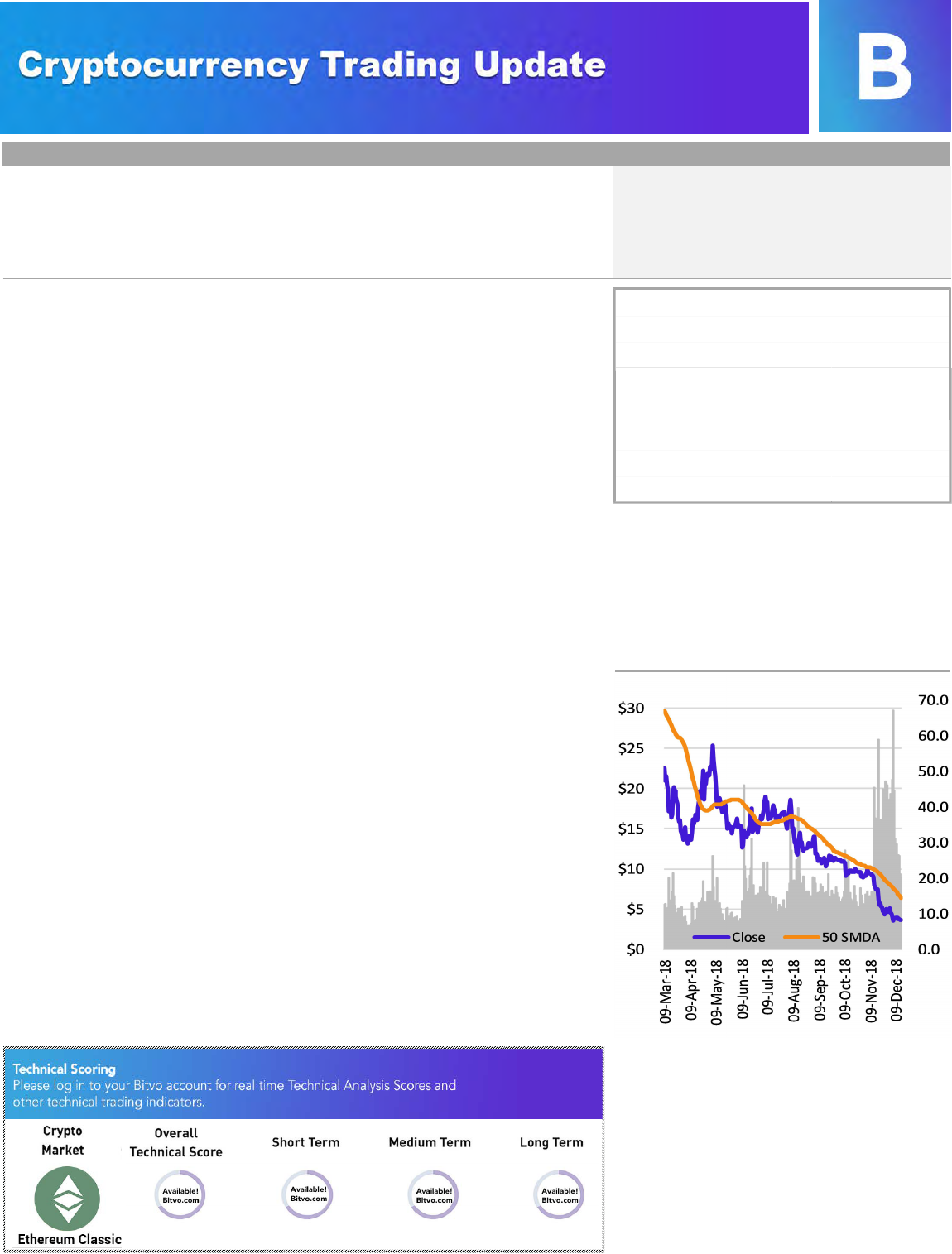 Bitvo.com
DISCLAIMER
The information contained in this report has been compiled by Bitvo (Bahamas) Inc. (“Bitvo”) from sources believed to be reliable, but
no representation or warranty, express or implied, is made by Bitvo, its affiliates or any other person as to its accuracy, completeness
or correctness. All opinions and estimates contained in this report constitute Bitvo’s judgement as of the date of this report, are
subject to change without notice and are provided in good faith but without legal responsibility. Nothing in this report constitutes legal,
accounting or tax advice or individually tailored investment advice. This material is prepared for general circulation to clients and has
been prepared without regard to the individual financial circumstances and objectives of persons who receive it. The cryptocurrencies
or services contained in this report may not be suitable for you and it is recommended that you consult an independent advisor if you
are in doubt about the suitability of such cryptocurrencies or services. This report is not an offer to sell or a solicitation of an offer to
buy any securities. Past performance is not a guide to future performance, future returns are not guaranteed, and a loss of original
capital may occur. The cryptocurrency market is volatile and rapidly changing and, as a result, the latest published reports available to
clients may not reflect recent material changes. Bitvo reports are current only as of the date set forth on the reports. This report is not,
and under no circumstances should be construed as, a solicitation to act as securities broker or dealer in any jurisdiction by any
person or company that is not legally permitted to carry on the business of a securities broker or dealer in that jurisdiction. To the full
extent permitted by law neither Bitvo nor any of its affiliates, nor any other person, accepts any liability whatsoever for any direct or
consequential loss arising from any use of this report or the information contained herein. No matter contained in this document may
be reproduced or copied by any means without the prior consent of Bitvo.
Page 8 of 8
December 17, 2018