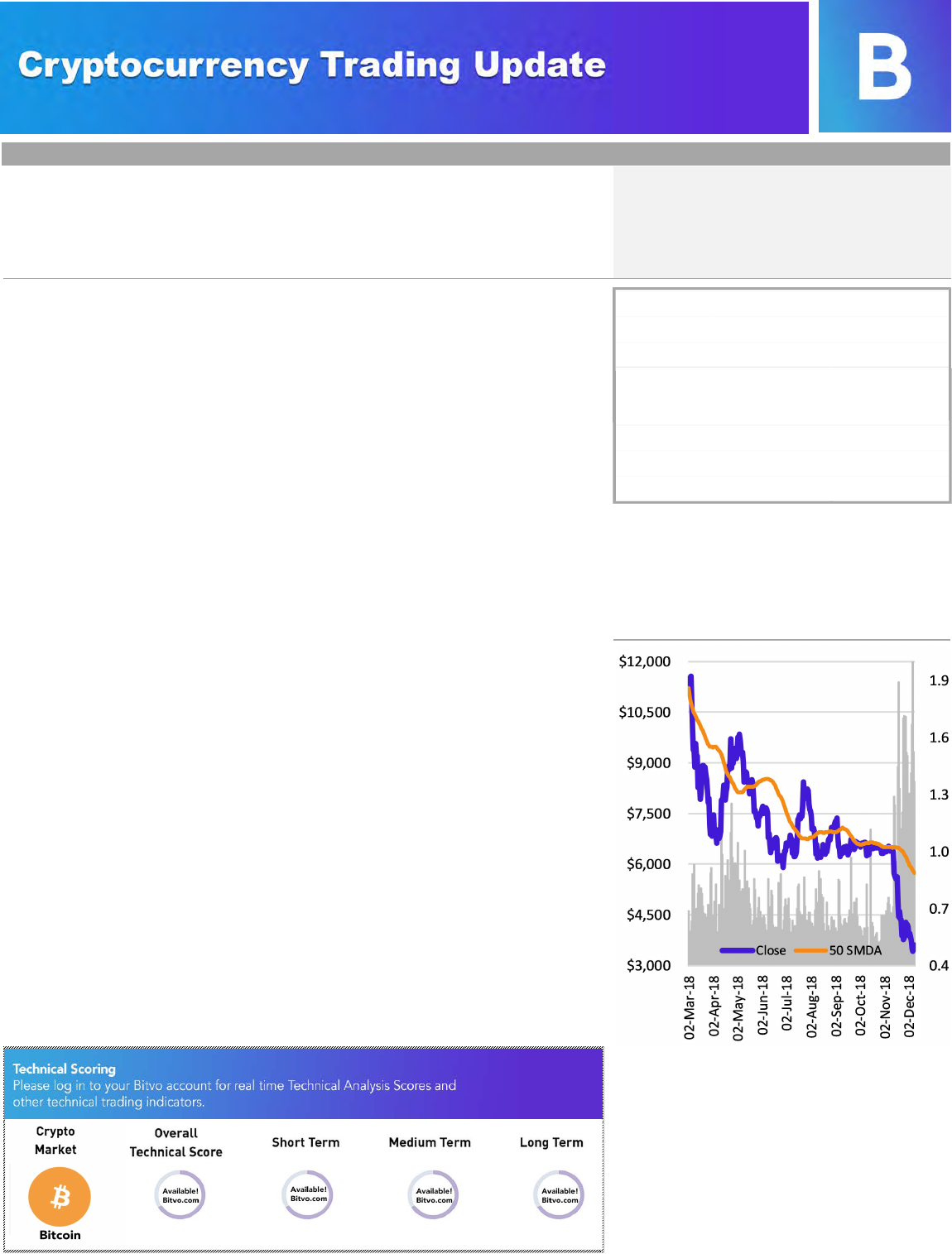 Bitvo.com
Bitcoin (BTC)
C$4,704 (US$3,
510)
December 10, 11:15 am
Shane Thomson, CFA
shane@bitvo.test
403.407.0046
Brett Thiessen
brett@bitvo.test
587.315.6608
Technical Trading Score*:
Date Of Inception:
2009
Primary Use:
CURRENCY
17mm
Coin Profile
Bitcoin is a decentralized coin enabling
revolutionary means to exchange value across the
globe. It continues to be the biggest and most
influential coin, encouraging peer-to-peer payment
networks powered by its users with no central or
middle authority.
Page 1 of 8
Coins Outstanding:
Maximum Coins:
21 mm
POW or POS:
WORK
Current Mining Fee (USD):
~$0.515
Website:
https://bitcoin.org
December 10, 2018
All figures in USD$, unless otherwise specified
LOG IN TO VIEW
■ General Cryptocurrency News:
• As part of the communique released after the Buenos Aires G20 summit last
week, world leaders pledged new regulations for “crypto-assets”. The proposals
were part of measures meant to grow the global economy by applying
technology to the financial sector.
• Galaxy Digital CEO, Mike Novogratz, announced that he is still positive on
cryptocurrencies despite the recent tumble the market has seen after the
euphoric 2017 rise. While admitting that the fall has been tough on investor
sentiment, he believes that as the SEC and other regulatory bodies solidify
rules governing digital currencies, institutional investors will grow more
comfortable allocating new capital to the asset class.
• South African Finance authorities have announced that they are seeking
comment on their proposed legislation that could potentially offer regulatory
certainty for cryptocurrencies. The regulations would be a complete overhaul of
the countries existing National Payment System and would seek to “allow/
enable new or unregulated service providers, services, systems and
instruments.”
■ BTC News:
• The SEC announced that they will be postponing their decision on the VanEck/
Solid X BTC ETF until February 27, 2019. Approximately 10 BTC ETFs have
been submitted by various companies in 2018.
• Pessimism around BTC prices has risen as short bets reached a six-week high
on various global exchanges this past week.
• Intel was awarded a patent by the U.S. Patent & Trademark Office for a new
processor it claims can conduct “energy-efficient high-performance bitcoin
mining.” The new processors would allow mining without the application of
hardware accelerators such as application-specific integrated circuits (ASIC).
■ Trading History YTD:
• BTC reached all-time highs at the end of 2017 and has since declined for most
of 2018.
■ Current Environment:
• BTC sold off early in the week to make a new short-term low of $US3,210.
• Volumes remained elevated this past week as the average coins traded per day
was 1.5 million. 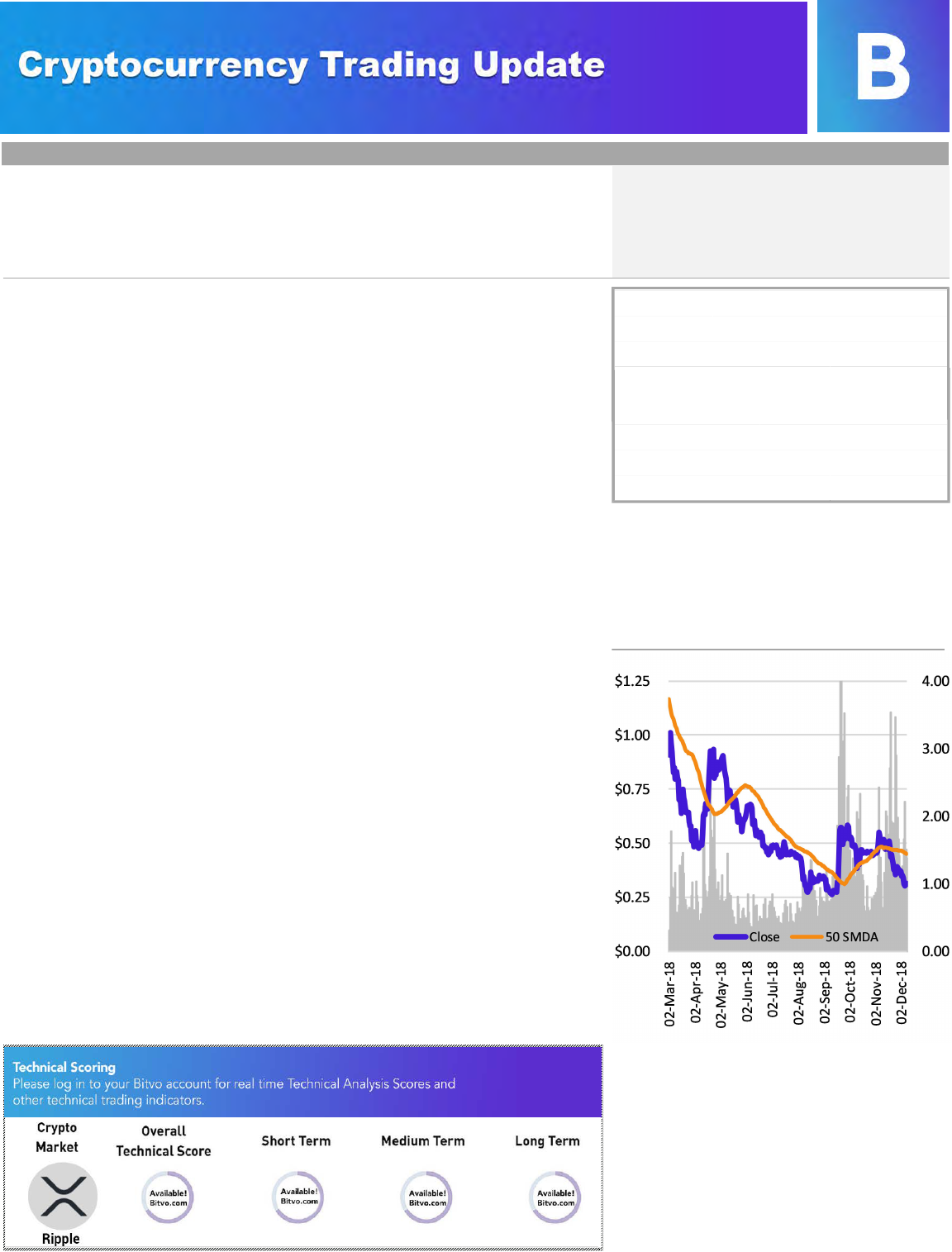 Bitvo.com
Technical Trading Score*:
Date Of Inception:
2012
Primary Use:
CURRENCY
99.99 Billion
Coin Profile
Ripple is a settlement system, currency exchange and
remittance network created by Ripple Labs Inc. It is built
upon a distributed open source internet protocol, and
supports tokens representing fiat currency or
cryptocurrency. The company purports to enable
“secure, instantly and nearly free global financial
transactions of any size with no chargebacks.”
Coins Outstanding:
Maximum Coins:
POW or POS:
CORRECTNESS
Website:
https://ripple.com/
Ripple (XRP)
C$0.40 (US$0.30)
December 10, 11:15 am
All figures in USD$, unless otherwise specified
Page 2 of 8
Shane Thomson, CFA
shane@bitvo.test
403.407.0046
Brett Thiessen
brett@bitvo.test
587.315.6608
~$0.0007
Current Mining Fee (USD):
LOG IN TO VIEW
100 Billion
■ XRP News:
• R3, a provider of distributed ledger technology, announced that it has added
functionality for XRP to its cryptocurrency settlements app. The move comes as
the two companies recently closed previous legal disputes stemming from
intellectual property rights.
■ Trading History YTD:
• XRP sustained a parabolic rise like the rest of the space at the end of 2017 and
has since fallen back to pre-December levels. Along the way, sharp rallies have
occurred only to sell back to trend.
■ Current Environment:
• XRP sold off early in the week to make a new short-term low of $US0.29.
• Volumes remained flat this week after moving higher most of October. Coins
traded per day averaged 1.48 billion.
December 10, 2018 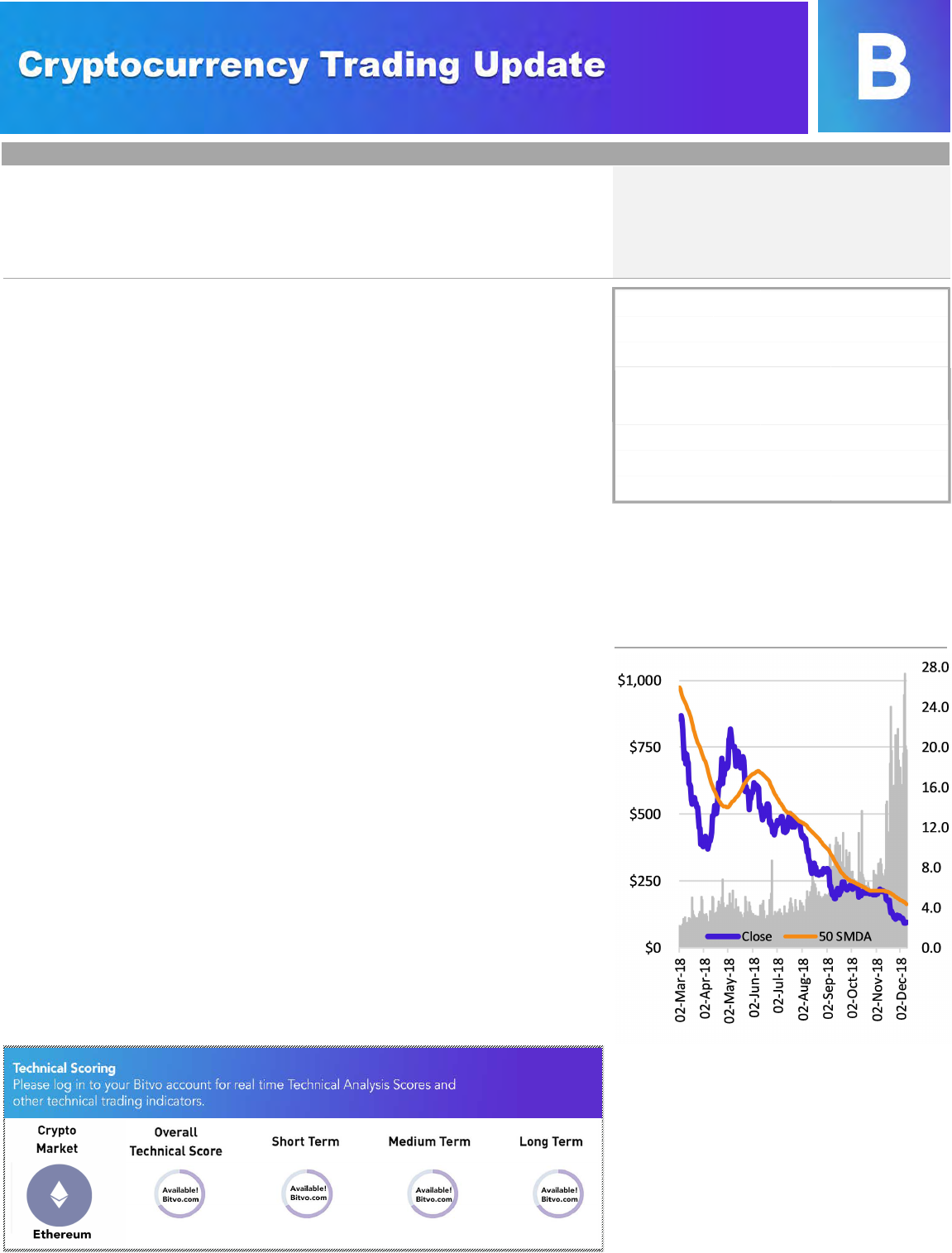 Bitvo.com
Technical Trading Score*:
Date Of Inception:
2014
Primary Use:
SMART CONTRACTS
Coins Outstanding:
100mm
Coin Profile
Ethereum is a decentralized platform that runs
smart contracts: applications that run exactly as
programmed without any possibility of downtime,
censorship, fraud or third-party interference. These
apps run on a custom built blockchain. Ether is the
cryptocurrency generated by and used on the
Ethereum platform.
Maximum Coins:
NO MAX
POW or POS:
WORK
Website:
https://www.ethereum.org/
Ether (ETH)
C$122 (US$91)
December 10, 11:15 am
All figures in USD$, unless otherwise specified
Page 3 of 8
Shane Thomson, CFA
shane@bitvo.test
403.407.0046
Brett Thiessen
brett@bitvo.test
587.315.6608
~$0.111
Current Mining Fee (USD):
LOG IN TO VIEW
December 10, 2018
■ ETH News:
• Ethereum’s core developer group has now reached an agreement on when the
blockchain’s new code change, Constantinople, will activate. Block number
7,080,000 is now agreed upon as the activation point at which ETH users will be
able to upgrade to the new code and is forecasted to be mined sometime
between January 14-18th, 2019.
• Signature Bank (NASDAQ:SBNY) announced it is planning to launch a
institutional payments platform which will be powered by a permissioned version
of the Ethereum blockchain. The platform, developed in conjunction with
trueDigital Holdings, will allow clients to move money 24/7 in less than 30
seconds by converting USD into permissioned ERC-20 standard tokens.
■ Trading History YTD:
• Despite rallying aggressively in April 2018, ETH has continued to fall during the
remainder of 2018. Small plateaus have consistently broken lower on high
volume.
■ Current Environment:
• ETH sold-off early in the week to make a new short-term low of US$81.91,
however, it has rallied since to the low-90’s.
• Volumes continued to accelerate last week as coins traded per day averaged
21 million. 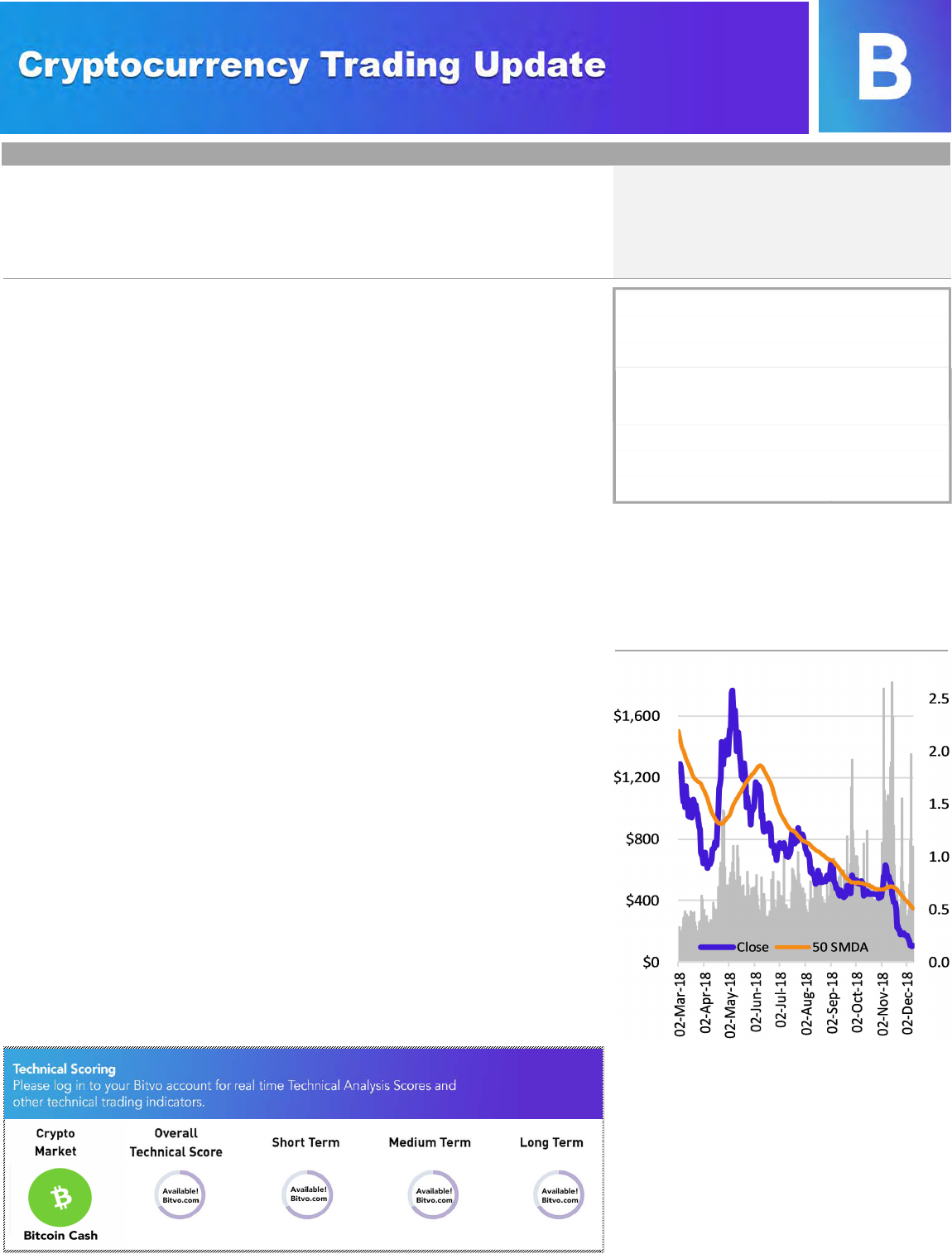 Bitvo.com
Technical Trading Score*:
Date Of Inception:
2017
Primary Use:
CURRENCY
17mm
Coin Profile
Bitcoin Cash is peer-to-peer electronic cash for
the Internet. It is fully decentralized, with no central
bank and requires no trusted third parties to operate.
Bitcoin Cash is the continuation of the Bitcoin project
as peer-to-peer digital cash. It is a fork of the Bitcoin
blockchain ledger, with upgraded consensus rules
that allow it to grow and scale.
Coins Outstanding:
Maximum Coins:
21 mm
POW or POS:
WORK
Website:
https://www.bitcoincash.org/
Bitcoin Cash (BCH)
C$141 (US$105)
December 10, 11:15 am
All figures in USD$, unless otherwise specified
Page 4 of 8
Shane Thomson, CFA
shane@bitvo.test
403.407.0046
Brett Thiessen
brett@bitvo.test
587.315.6608
~$0.0004
Current Mining Fee (USD):
LOG IN TO VIEW
December 10, 2018
■ BCH News:
• Despite losing the mining war to incumbent BCH ABC, BCH Satoshi’s Vision
(BCH SV) is now worth more than BCH ABC as the new coin has relatively
outperformed the rest of cryptocurrencies during the recent sell-off.
• A new lawsuit has been filed, which alleges that BCH ABC proponents illegally
colluded to manipulate the market and disadvantage BCH SV during the
November 15 hard fork. The lawsuit was filed for United Investment Corp.
against Roger Ver, Bitcoin.com, a Bitmain co-founder, and the founder of the
Kraken BTC exchange.
■ Trading History YTD:
• After rallying throughout May, BCH has ground slowly downward alongside the
general cryptocurrency markets for the balance of 2018.
■ Current Environment:
• BCH sold off during the week to make a new short-term low of US$100.
• Volumes remain elevated as coins traded averaged two million per day during
the week. 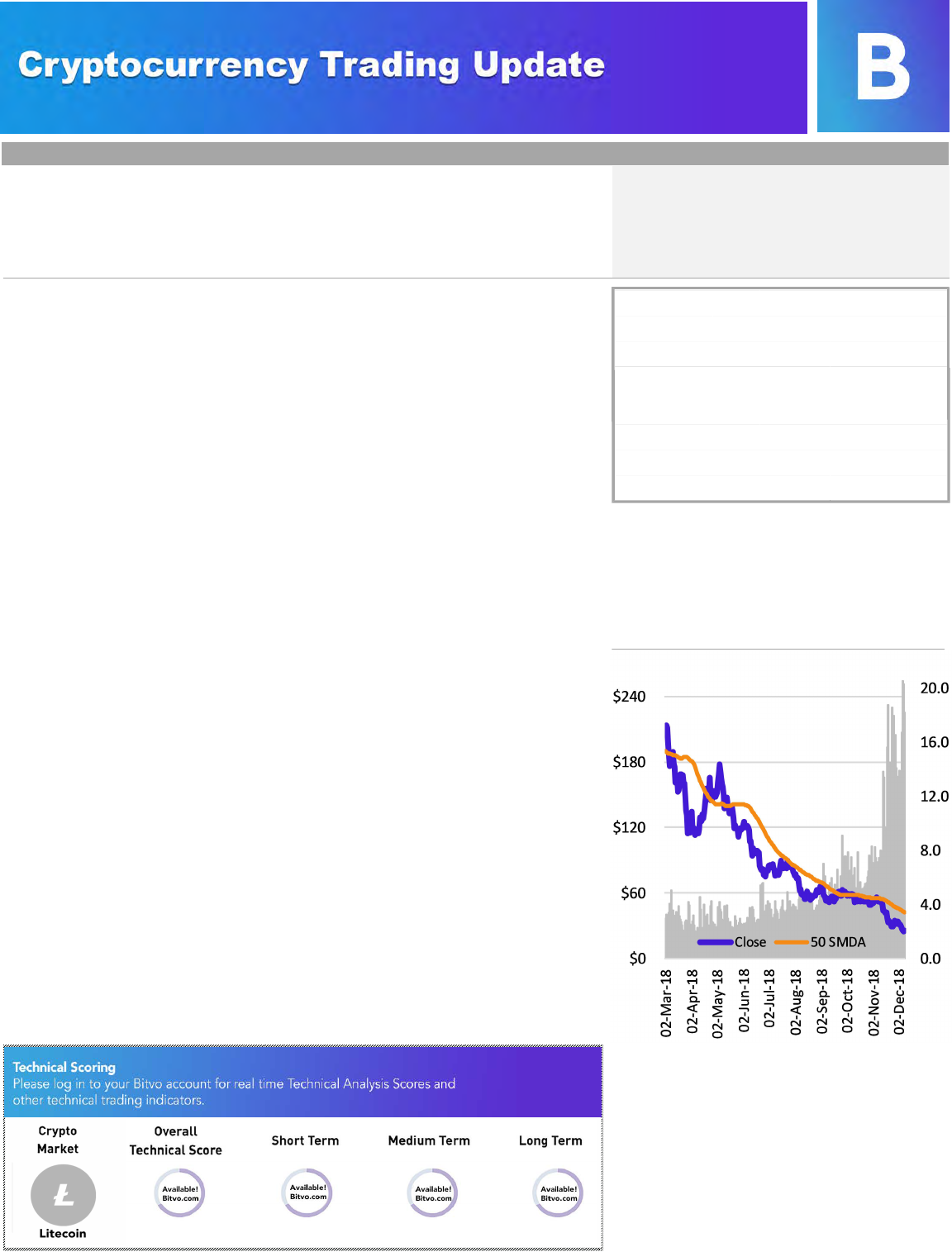 Bitvo.com
Technical Trading Score*:
Date Of Inception:
2011
Primary Use:
CURRENCY
55mm
Coin Profile
Litecoin is a peer-to-peer cryptocurrency
and open source software project released under
the MIT/X11 license. Creation and transfer of
coins is based on an open source cryptographic
protocol and is not managed by any central authority.
The coin was inspired by, and in technical details is
nearly identical to, Bitcoin.
Coins Outstanding:
Maximum Coins:
84 mm
POW or POS:
WORK
Website:
https://litecoin.com/
Litecoin (LTC)
C$33 (US$25)
December 10, 11:15 am
All figures in USD$, unless otherwise specified
Page 5 of 8
Shane Thomson, CFA
shane@bitvo.test
403.407.0046
Brett Thiessen
brett@bitvo.test
587.315.6608
~$0.022
Current Mining Fee (USD):
LOG IN TO VIEW
December 10, 2018
■ LTC News:
• No significant LTC-related news this week.
■ Trading History YTD:
• Since December 2017 which saw LTC rally more than 400%, the price of LTC
has steadily declined throughout 2018. Some counterrallies have been seen
since then, but nothing that has broken the descending triangle formation.
• Volumes have started to rise in LTC after stabilizing at four million coins traded
per day.
■ Current Environment:
• BCH sold off during the week to make a new short-term low of US$23.19.
• Volumes remained elevated this past week as coins traded per day averaged
16.6 million. 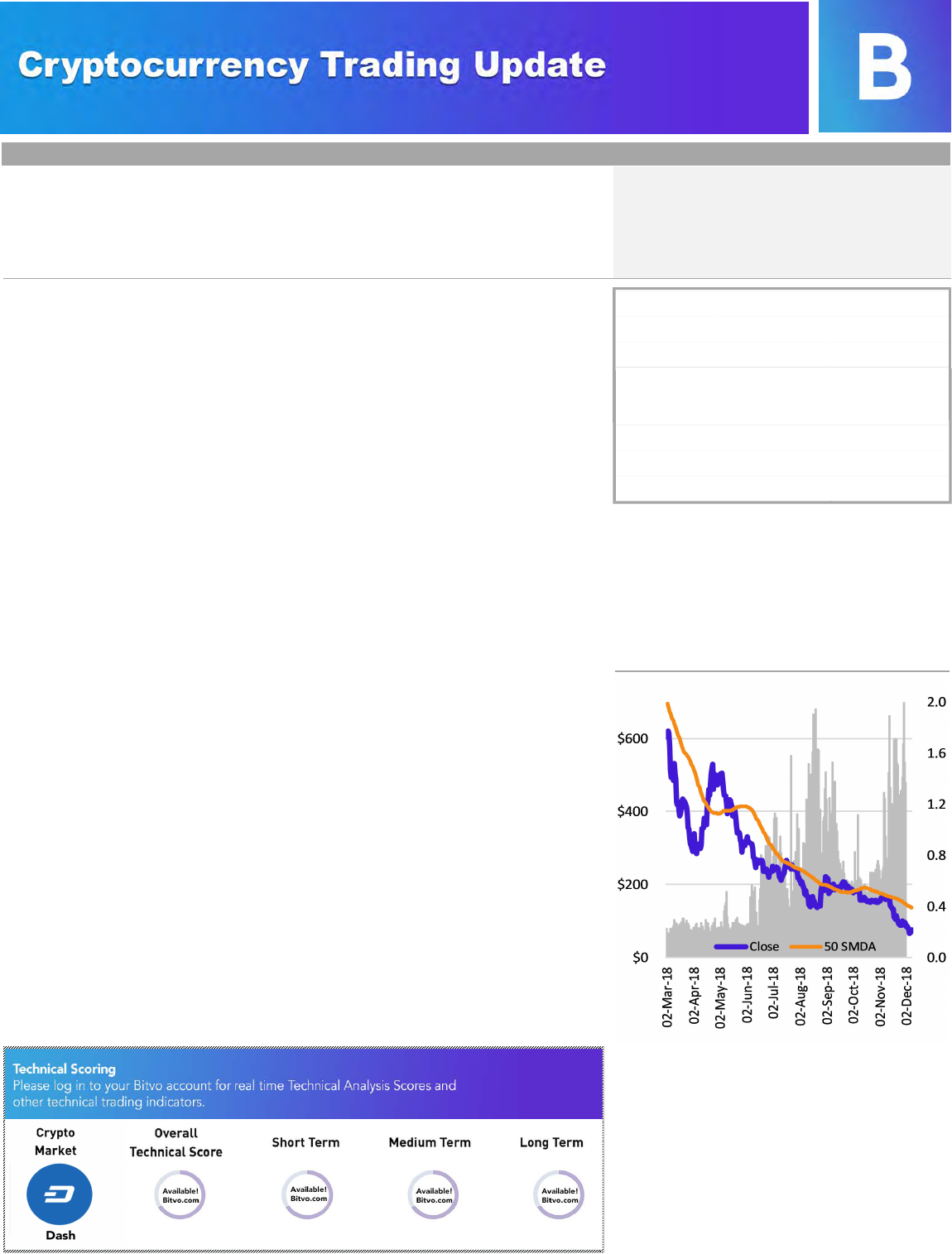 Bitvo.com
Technical Trading Score*:
Date Of Inception:
2014
Primary Use:
CURRENCY
8 mm
Coin Profile
Dash is an open source peer to peer cryptocurrency.
On top of Bitcoin’s feature set, it currently offers instant
transactions, private transactions and operates a self-
governing and self-funding model that enables the
Dash network to pay individuals and businesses to
perform work that adds value to the network. Dash’s
decentralized governance and budgeting system
makes it a decentralized autonomous organization.
Coins Outstanding:
Maximum Coins:
22 mm
POW or POS:
STAKE
Website:
https://www.dash.org/
DASH (DASH)
C$93 (US$69)
December 10, 11:15 am
All figures in USD$, unless otherwise specified
Page 6 of 8
Shane Thomson, CFA
shane@bitvo.test
403.407.0046
Brett Thiessen
brett@bitvo.test
587.315.6608
~$0.0363
Current Mining Fee (USD):
LOG IN TO VIEW
December 10, 2018
■ DASH News:
• No significant DASH-related news.
■ Trading History YTD:
• The price of DASH has trended negatively over the past year despite various
counterrallies and a recent rise in volume due to increased adoption.
• Market participants have attributed this year’s decline to sentiment in the
overall crypto markets as well as the coin more than quadrupling in price
during late 2017.
■ Current Environment:
• DASH sold off during the week to make a new short-term low of US$60.15.
• Volumes remained flat coins traded per day averaged 1.5 million per day. 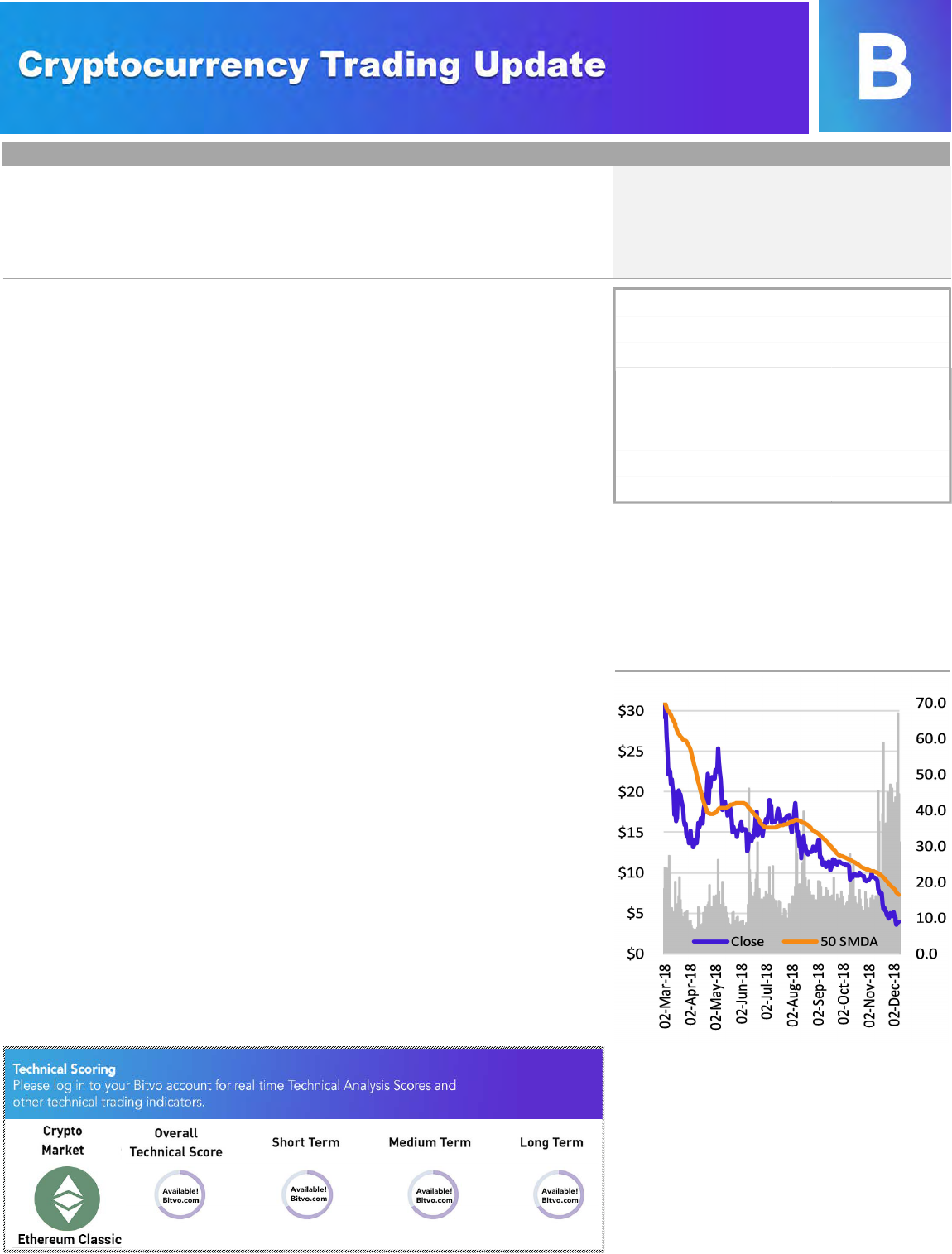 Bitvo.com
DISCLAIMER
The information contained in this report has been compiled by Bitvo (Bahamas) Inc. (“Bitvo”) from sources believed to be reliable, but
no representation or warranty, express or implied, is made by Bitvo, its affiliates or any other person as to its accuracy, completeness
or correctness. All opinions and estimates contained in this report constitute Bitvo’s judgement as of the date of this report, are
subject to change without notice and are provided in good faith but without legal responsibility. Nothing in this report constitutes legal,
accounting or tax advice or individually tailored investment advice. This material is prepared for general circulation to clients and has
been prepared without regard to the individual financial circumstances and objectives of persons who receive it. The cryptocurrencies
or services contained in this report may not be suitable for you and it is recommended that you consult an independent advisor if you
are in doubt about the suitability of such cryptocurrencies or services. This report is not an offer to sell or a solicitation of an offer to
buy any securities. Past performance is not a guide to future performance, future returns are not guaranteed, and a loss of original
capital may occur. The cryptocurrency market is volatile and rapidly changing and, as a result, the latest published reports available to
clients may not reflect recent material changes. Bitvo reports are current only as of the date set forth on the reports. This report is not,
and under no circumstances should be construed as, a solicitation to act as securities broker or dealer in any jurisdiction by any
person or company that is not legally permitted to carry on the business of a securities broker or dealer in that jurisdiction. To the full
extent permitted by law neither Bitvo nor any of its affiliates, nor any other person, accepts any liability whatsoever for any direct or
consequential loss arising from any use of this report or the information contained herein. No matter contained in this document may
be reproduced or copied by any means without the prior consent of Bitvo.
Page 8 of 8
December 10, 2018