The Bitcoin miracle highlights the value of regulation

Once in a lifetime, you get to see a whole new financial market like Bitcoin and crypto come to life. In an era choking on a myriad of regulations, you also get to see the other side of the coin, what a market without regulation looks like.

And it all started with one white paper during a complete financial system failure.

Let’s go back for a moment to put that into perspective. 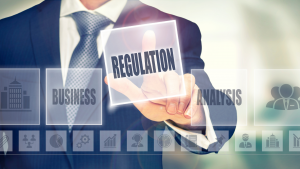 A fireball of failure

It’s something to watch as a giant financial firm collapses. One day they are one of the biggest most recognized names in their space. Then a few days later they collapse. All it took was a cash call on a fund that couldn’t be met. Then a rumour was circulating that firms were pulling their orders from the company. Then, POOF, Bear Stearns was culled from the sector.

When Lehman fell, it was even more gut-wrenching.

The financial system was under stress across the globe. Whole secondary markets became fire pits of sellers with few, if any bids. The US dollar and treasuries went bid, and everything else was sold.

Short selling was banned in financial stocks, an unthinkable event in North American markets. Then came the aid package after a former chairman of a giant investment bank took a knee and begged.

In the smouldering ashes of this event, a digital white paper described a new vision of a  monetary instrument. It was a reaction to the problems being experienced. It was a conceptual idea built around several different technologies.

And nobody knew what to do with it…

A love hate relationship with regulation

Participants in financial markets have a love hate relationship with regulation. On the one hand, they understand why regs are necessary. But on the other hand, their direct participation in the market means they carry additional risk.

Then along comes a nascent digital technology that throws all of that to the wind.

You see, Bitcoin is, as Taleb would say, a Black Swan. It is an improbable event. Totally unexpected. Difficult to define and both revolutionary and evolutionary at the same time.

Bitcoin is powerful not because of what it is, but rather because of how it is changing the way we think about what already exists.

Markets and monetary rules, structures and assets are built on 2500 years of history, tradition and experience. We are using things developed through trial and error. Lots of which have been shaped by technology.

A new conversation about money

The telegraph changed trading. Electronic markets facilitated by the internet completely changed the speed, volume and access to financial markets. Fibre optic lines increased the volume of digital blood moving around the globe as copper lines choked on the flood of new data.

In fact, it has become so complex that few know what to do with it. And when things got rough, failures are fast and ferocious.

But what Bitcoin has done is to start a conversation about money. It has got people thinking about an alternative. A better way to interact in trade and finance. It has opened up the system to a new group of thinkers, but it also has a problem.

Lots of those evangelists think the old lessons don’t matter.

The other relationship with regulation. None.

Bitcoin has no regulation other than a sophisticated mining and verification protocol. It has no fixed value and cannot be controlled other than individual assets by individual entities. There is no restriction on ownership and transfer. No rules on manipulation. No protection from theft and malfeasance.

Bitcoin is designed for pure human agency. You are responsible for your coins, your keys, your trades. This could not have come from our current financial system as it is now.

As Bitcoin grew, and various other coins and tokens were spawned, an entire system appeared almost overnight. And it was then that we got to see what an unregulated market might look like.

In the western world, we take a lot about our financial system for granted.

Our deposits are guaranteed. Individual investors are protected to the point where they are barely responsible for their decisions, if at all. Consumers are protected from predatory behaviour. Outside of finance, returns and warranties are the norm.

And enforcement is an ever-present threat to malfeasance.

With Bitcoin and the ICO market that developed, there was none of that. The more human involvement in the “project,” the higher the risk for fraud and dishonesty.

People with no understanding of how money works in the traditional market were provided with funds beyond their wildest dreams based on a vision. Too many borrowed credibility from Bitcoin and fleeced unsuspecting investors with projects that never took flight.

One CEO disappeared and took everyone’s crypto holdings at his exchange with him.

But we learned something valuable about the system we already have in the first place, that regulation has a place and a reason.

Borrowed from the markets

Now, the other interesting thing about crypto is that the entire ecosystem looks like a mishmash of different traditional market specialties.

For example, Bitcoin trades a lot like a junior mining stock with similar influences, volatility and abstraction. But it also seems a lot like a currency. In some respects, it seems to act a bit like a commodity. And it’s also an international payment system. In other words, it’s an abstraction that permits a definition and value to be attributed to it.

So when Bitcoin is described as programmable money, it can mean both digital programing and mental programming.

In a regulated environment, this sort of ambiguity would be challenging to pull off; and it shows in the way regulators have been approaching crypto.

Bitcoin and its evil token spawn have also demonstrated some truisms about existing markets.

In other words, liquid secondary markets drive confidence and have important utility for trade.

Regulation doesn’t guarantee volume and interest but helps to facilitate the credibility and confidence that lead to them.

The ICO market of 2017 and 2018 provided numerous examples of why regulation is a good thing. It also demonstrated why a lot of people should not be entrusted with other people’s money.

However, at the same time, the demand for these projects show that there are people hungry for investment opportunities. People are willing to take full responsibility for their financial decisions. And people are prepared to eat the losses as long as they can participate in the gains.

Without Bitcoin, we would never have seen in real-time, what regulations are necessary, and which ones could use adjustment. Without the altcoin spawn of Bitcoin, we might never have realized the true potential of the technology we have at our disposal.

But for that potential to flourish, these markets should take stock of the 2500 years of trial and error already exercised. And avoid wasting time, learning the same expensive lessons of the past again in the future.

Canadians can buy, sell and trade Bitcoin, QCAD and Ether on Bitvo, a secure, fast and easy to use digital currency exchange platform.