Is bitcoin a replacement for the dollar?

I’ve heard this question in several podcasts recently where a financial pro is being interviewed.

The answer is nuanced because the assumption is that the dollar is falling apart in the current environment.

And yet when you look at the dollar index (DXY) in the image from TradingView below, it’s actually going higher.

Now, if you go over to the Swift report on monthly transactions by currency, you’ll see something else. That “failing dollar” still represents as much as 87.19% of all trade finance as of July 2022. By contrast, China, the country with the supposed currency in waiting, is around 3.07%.

The market is filled with narratives, and not all of these are supported by current evidence. And if we are looking for a specific event, we should be able to look for clues that what we think is happening is in progress.

One way to do this is with some intermarket analysis.

Intermarket analysis brings together market information across products relevant to the business cycle. These help us see how the market is evolving and changing. It can show inflection points between these products and may provide some clues to the evolving environment.

Now, as always, this isn’t trading advice. The idea here is to bring your attention to other parts of the financial system and suggest how you can explore a theme along with your own methodology.

And that starts with the island problem. 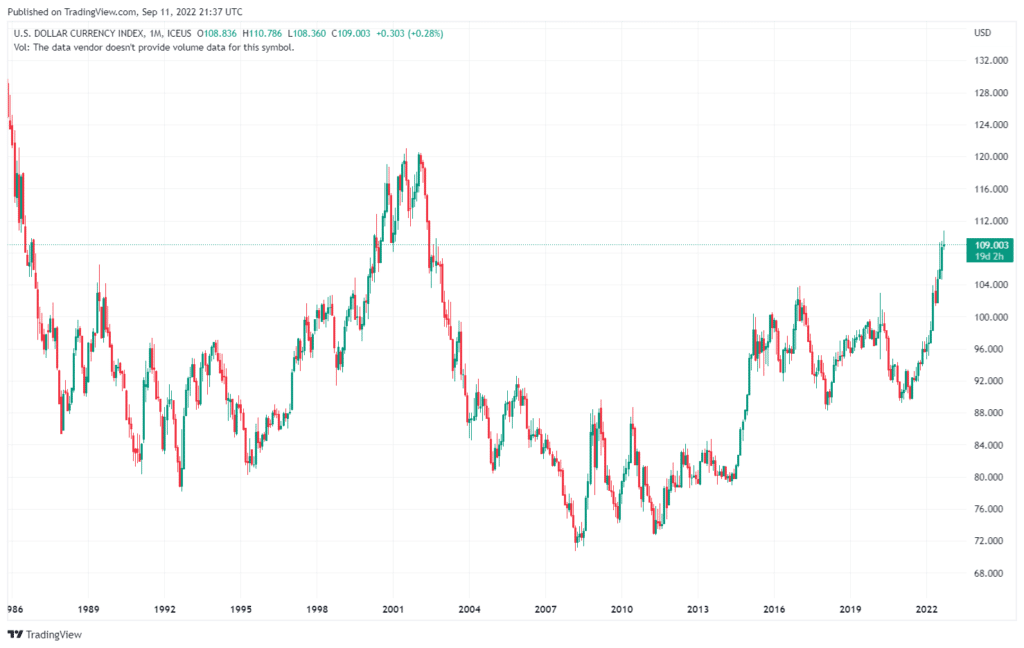 Crypto is no longer a financial island

It was easy to think about crypto as an island back before 2020. Bitcoin did its own thing, and the growing number of projects had a unique early startup stage audience to support them.

The trading in BTC, ETH, and other crypto assets reflected the community built around them. It also reflected an evolving narrative around what crypto was and could be.

One of these narratives was that crypto was a hedge.

Another is that it is sound money. Or, put another way, it represents a form of incorruptible value exchange. And the idea here was that this new form of sound money would replace the current system.

But in the meantime, crypto has followed an interesting path.

Like much of technology, it has followed the adoption curve through the various stages of growth. And as the participants changed, the trading changed.

Crypto has moved from an island to a loose part of a wider global asset mix. This is similar to the way John Murphy describes how the financial system was analyzed by technical analysts in the 80s. It was siloed. And one day he started to look at intermarket relationships between various financial assets.

And that changed everything.

The birth of intermarket technical analysis

Back in 1991, the legendary technical analyst John Murphy published his book Intermarket Technical Analysis. The book was a byproduct of his work with the CRB (Commodity Research Bureau).

Prior to the 1980s, traders followed specific markets as if they were islands. So stocks, bonds, commodities, and currencies were individual islands of trading.

His insight was to start looking at the charts of these areas to see if there were exploitable relationships. And what he discovered is that relationships did, in fact, exist.

By looking at the CRB Index (a basket of commodities), the Dollar Index (DXY), T Bonds, and stock index futures, he could see the evolving business cycle.

The book starts by looking specifically at the 1987 crash and the chart patterns starting before the event and following it. Through this technical analysis, he was able to see trading patterns that reflected the evolving business cycle at the time.

And through that, a view of the interconnected nature of markets grew.

Lots of financial products were relatively new in the 80s

Now for some important context about this period in the mid-80s.

Currency futures started in 1972, followed by rate futures in 1975. Futures for stock indices began in 1982. So at the time when this book was written, these products were give or take about the same age as bitcoin.

And we have watched as bitcoin, ether, and the other major crypto assets are also following a similar path to maturity. Now there are futures and options contracts available for BTC and ETH, as well as other products to help define pricing and engage in speculation and hedging.

So Murphy is making a discovery in the midst of an evolving market with sort of new trading products with growing liquidity. And he is deriving signals from the complex relationship between these elements and how they drive an economic business cycle.

Economic cycles are driven by a combination of demand for goods and services, which are supplied by companies, both of which shape the demand curve for financing, which itself is in part shaped by the actions of the central bank.

The dollar, at the center of global trade, is shaped by interest rates and demand while also influencing global economic trade through pricing commodities relative to local currencies. These commodities are a cost of business for companies producing physical goods.  And the two biggest cost inputs for most businesses are typically energy and labor.

And these elements ebb and flow based on the expectations and actions of participants, which was referred to as Reflexivity in Soros’ book Alchemy of Finance, originally published in 1987.

But some things have changed

Things have changed since Murphy wrote his book.

The Federal Reserve has moved from a key player to the buyer of last resort. This took place over the last twenty years through a series of crises. And it assumed this powerful position in the aftermath of the Great Financial Crisis of 2008.

This means that pricing dynamics have to consider that the Fed now plays a role in shaping prices to a far greater extent than it did in the 1980s.

In addition, technology has fundamentally changed trading through HFTs, algorithms, and program trading.

And crypto is borrowing from these and building on them.

Crypto moved closer to the mainstream in 2020. That’s when institutional demand took center stage. Many stodgy old conservative institutions started looking at the cutting-edge idea as a viable addition to their balance sheets.

With their participation, the narrative continued to evolve.

But crypto is now a reflection of a maturing market in a wider matrix of assets.

Crypto has evolved as the participants have changed

As larger, more traditional players entered the market they built a shorthand story around the asset. The asset trades, at this time, more like a tech index as a result. And as we have seen recently, tech is affected in a big way by changes in interest rates and economic conditions.

And we know that economic conditions are a reflection of the interplay between the dollar, commodities, the cost of capital, and capital formation.

The Fed is raising rates into a recession. The increase in rates is driving down activity much more quickly than many thought possible.

As the dollar rises, it creates a massive global short squeeze.

So one thought out there is that we are at the end of the current monetary environment. And the dollar is likely to fail, but it will not fail lower, but instead, it may fail higher by destroying the entire system it supports.

So if you are thinking about bitcoin as a replacement for the dollar, you are going to have to think about a much bigger playing field.

Nobody knows the answer to the bitcoin dollar question

Intermarket analysis can be as simple or complex as you want. But if you think about an economic cycle, that will mean following the dollar, commodities, bonds, and stocks. Even if the cycle is changed or distorted, there will be rich information in looking at the totality of market assets together.

And you may want to keep an eye on European markets and the Euro this winter, where policy decisions may drive a flight to safety into the US dollar, taking it even higher. But you already know the trading environment ahead will be rich with catalysts.

We have watched how various crypto businesses have failed recently. A couple of these were like mini-financial ecosystems. Now think about these issues on a global scale, and the potential outcomes start to become unimaginable.

Will bitcoin replace the dollar?

I don’t know. I don’t think anyone does, including the biggest prognosticators of this idea. There are a lot of people romanticizing the end of the dollar because it will make something they own go higher.

But thinking about this bitcoin/dollar narrative while realizing the implications of it should induce some queasiness.

Because a change like this is never that simple or clean.

So if you aren’t getting prepared, now is the time. Keep an eye on those other indicators and get ready for the unexpected.