The deeper you get into the trading arena, the more you will notice the power of expectations.

Expectations shape pricing and the moves in response to news and events.

They shape how market participants reflexively respond and reposition which further influences prices and policies.

And that means that expectations affect your trading decisions.

As an example, we’re going to look at a specific event that demonstrates positioning for a catalyst. And we will explore the elements that made that event a focal point for market participants.

We will explore the reaction and the adjustment of expectations. And we will look at how crypto responds through the lens of bitcoin.

Now, as always, what follows is not trading advice or any sort of recommendation about what you should or should not do. Instead, I’m bringing to your attention an important element of the broader market that may impact your trading activities.

The catalyst is the September 2022 Consumer Price Index (CPI) print, which caused some significant market volatility last week, and the trading activity around this catalyst.

For reference, we have the chart from TradingView.com below showing the S&P 500 index (candles) and bitcoin priced in USDT (line) with bitcoin data from FTX for reference. 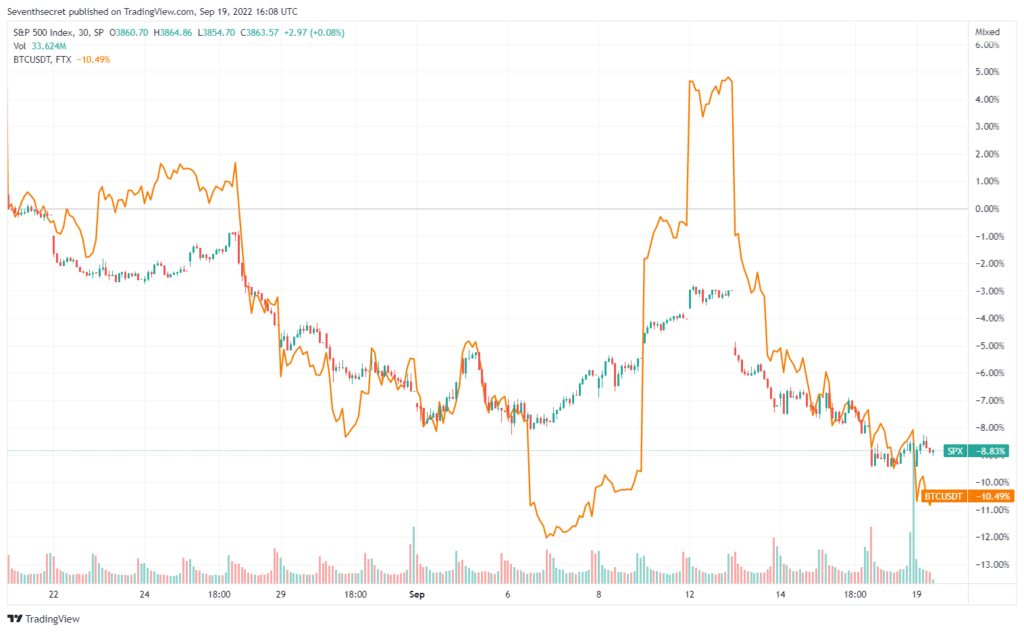 The Fed and the economic data

Every month the US Government releases a series of economic reports. Canada has these too, but we will be focused on the US because the Federal Reserve can be considered the world’s central bank.

These reports give some insight into the economic conditions taking place. Some of these have a lag. Others are more recent. And there are other reports that give more granular insights into business conditions and numerous other metrics.

These data points have varying relevance and importance based on circumstances in the real world. So one data point might be a focal point in one period and of little relevance in another.

And, of course, there are seasonal trends in many data points.

Right now, there is a focus on inflation. Inflation management falls to the Federal Reserve through its labor and price stability mandate. The Fed has various monetary tools at its disposal to do this. The most obvious is the use of interest rates.

The Fed relies on various data points to make decisions around the level of rates. And they have models and theories to make predictions about what they see happening.

Professional investors attempt to anticipate what the Fed will do by reading the economic tea leaves. These predictions by investors form a consensus number, AKA, what is expected. Outliers from this consensus or expected number are sometimes called whisper numbers.

If you go to Finviz.com and scroll down the page about halfway, you will see the economic releases for the day. Here you can see the prior number, the expected number, and the actual number for the data points.

What is the CPI?

The CPI number comes from the US Bureau of Labor Statistics.

The changes in prices are considered a measure of inflation in the economy. And when you put several reports together, you can see trends and changes in trends.

One of the criticisms of the report is that the methodologies have been changed previously, so it doesn’t represent the real change taking place. Another is that it isn’t a realistic gauge of prices real people experience. It is often believed that prices are typically much higher than reported.

Should you worry about these criticisms? No. You should, however, be aware of them. And remember that all of the bots that pay for the newsfeeds where the data come from don’t care about these flaws. All that matters is the number relative to the expectation and the trend.

And in an inflationary environment, this is a key number that most market watchers are focused on because it can affect the Fed’s decisions on rates.

Now, this isn’t the only number that matters. There is also the producer Price Index (PPI) which measures input prices for businesses.

There are unemployment claims, continuing claims, and the “jobs number” to measure employment trends. There are also various reports from each Federal Reserve banking region. And there are weekly EIA oil numbers that come out every Wednesday that shape energy prices.

For most businesses, their two biggest inputs are labor and energy. Changes in labor and energy prices eventually flow through to the consumer in the form of higher prices. It can also appear through shrinkflation, where the thing you usually buy is the same price, but you get less of it.

For consumers, there are a variety of demands on their income, many of which are included in the CPI.

And all of this is part of a system where the Fed has an inflation target of 2%. Why 2%? Part of the target is that 2% encourages capital flows. Meaning, that with an ongoing loss of purchasing power, the system is designed to encourage investment to overcome this deficit.

Which might also explain part of the reason that deflation tends to be avoided at all costs.

The CPI reflects a much bigger picture

Now, the backdrop for the CPI event is every bit as important as the event itself.

Over the last two years, previously unimaginable levels of liquidity were created. I believe the figure is a 65% YoY increase in money supply in two years. The St. Louis Fed has a chart to show you just how dramatic this has been.

One explanation for this liquidity change is the pandemic conditions. Another takes us back to the end of 2019, when a credit crisis was brewing. If you heard about a giant amount of overnight liquidity being supplied to the repo market, that signaled a big problem. In one narrative, the 2020 shutdown provided cover for a liquidity event to paper over this challenge.

Now the increase in M1 also accompanies gargantuan spending by congress. The result is an explosion of money in the system. This liquidity is widely believed to be the primary driver of inflation.

The other driver of inflation is supply chain issues, particularly in energy. And then there was a conflict in Eurasia that took this supply chain problem in energy and made it worse.

Add to this a nuanced labor problem. Recent actuarial reports for group life policyholders and the recent uptick in disability seem to suggest something is happening to working-age people. The NFIB small business survey indicates a labor problem in terms of quality for many businesses. And that’s in spite of numerous layoffs. Put it all together, and the competition for skilled labor is fierce.

All of these add to the costs that must be passed on to consumers through the economy.

Into this backdrop, the Fed is raising interest rates to try and contain the inflation problem. According to some, those rate increases have already put a significant part of the economy into recession. Others believe these increases influence the economy with a longer lag time.

And many on Wall Street are trying to figure out when the policy action becomes a policy mistake.

The reason is that a policy mistake means that the Fed will either have to pause or reverse course. And if they reverse course, the looser conditions will lead to a bid in stocks and the return to “good times.” This is why the CPI took on an unusually high level of focus.

Strategists start staging their bias for the number and what hike rate will result. Traders build positions around the expected outcome. And then there are whisper numbers floating around of what non-public outlier expectations are.

And you can see these positions taking shape into the CPI print, making it a powerful potential catalyst.

Now, before the CPI release, there was chatter that the Fed would have to pause or reverse, which changed market conditions. Over the Jackson Hole event, various Federal Reserve board members made speeches to reshape expectations. These speeches were described as hawkish, meaning in favor of higher rates.

The market sold off on these speeches. But then, a consensus started to build around the idea of a lower CPI print. This would demonstrate that the Fed action so far was working and a reason for a policy change.

There was talk of a “7%” print or an outlier belief of a number less than the 8.1 expected.

And if you look at the market, a series of rallies occurred as the market attempted to discount this potential outcome. Bitcoin rallied right along with the broader market.

Then the number came out

Coming into the CPI number, there was talk of large call option interest, which could be bullish or a hedge to protect some high conviction short sales.

And looking at the charts, you can see this buildup of expectation through the trading action.

Then the number came out…

On September 13, the August CPI number came in “hot.” Meaning it was above the consensus expectation number. Looking back at the chart, you can see the gap opening lower in the S&P.

Bitcoin fell along with the rest of the broader market.

And in a couple of days, the data will be parsed through, and the focus will move to the next crucial data point. The CPI print will be added to the puzzle, trying to find the Fed inflection point.

Why do they do this?

Getting this right can be worth many billions of dollars in profits.

Now, as a crypto trader, what does this mean for you?

Understand expectations, including your own

Many crypto narratives have a tendency to describe the world in terms of absolutes. We talked about this in relation to replacing the dollar recently. The idea is that the path to world nirvana is just to replace what’s there with a new, better, and more equitable alternative. Easy peasy.

But what is forgotten is that $6.6 trillion in currency trading takes place every day as of 2019. All those money flows involve entrenched interests, some of which are centuries in the making. And an increasingly small group of individuals in central banks around the world have the ability to shape the moves in these flows in every asset they are priced and settled in.

So the path ahead requires an understanding of the role bitcoin and different parts of crypto play in the current worldwide asset mix. And that means understanding how trading is being influenced by other forces in the wider economic matrix.

One of these forces is expectations and how they are shaped.

And as you look around, you will see that every article, every piece of news, content, narrative, and evaluation of market action shapes expectations. Which is why this is so important to consider.

Moving ahead the narratives will be changing. There are many catalysts ahead that are much more significant than the CPI number. And in each case, lots of pundits, journalists, influences, and chatterers will be working hard to shape expectations.

All of which will create significant trading opportunities.

And knowing what the expectations are, and when the catalysts are due, can help you manage risk effectively in a chaotic environment.

Changing expectations will provide numerous opportunities to add and lay off positions this fall, if you’re nimble.

And in the meantime, it’s also a good time to review your own expectations and see where they land and where they should be adjusted.