Leverage is a fundamental part of a maturing financial asset. And while many trade Bitcoin without leverage, you cannot ignore the impact that leverage has on the market.

Leverage shapes market activity on the upside and the downside.

For Bitcoin traders, even when you don’t use leverage, it directly impacts your hodlings.

So you have to be aware of how leverage works even when you aren’t using it directly.

Unique trading opportunities are created when leverage is periodically unwound.

Bitcoin provided two significant opportunities in March 2020 and May 2021.

We’ll look at what drove the buildup of leverage in Bitcoin during those two events. Then how you might use the events to your advantage.

And just in case there is any confusion, this is not advice but a thought exercise. Every trader has different goals, priorities and risk tolerance. You should evaluate and understand your personal situation thoroughly before trading in any market. 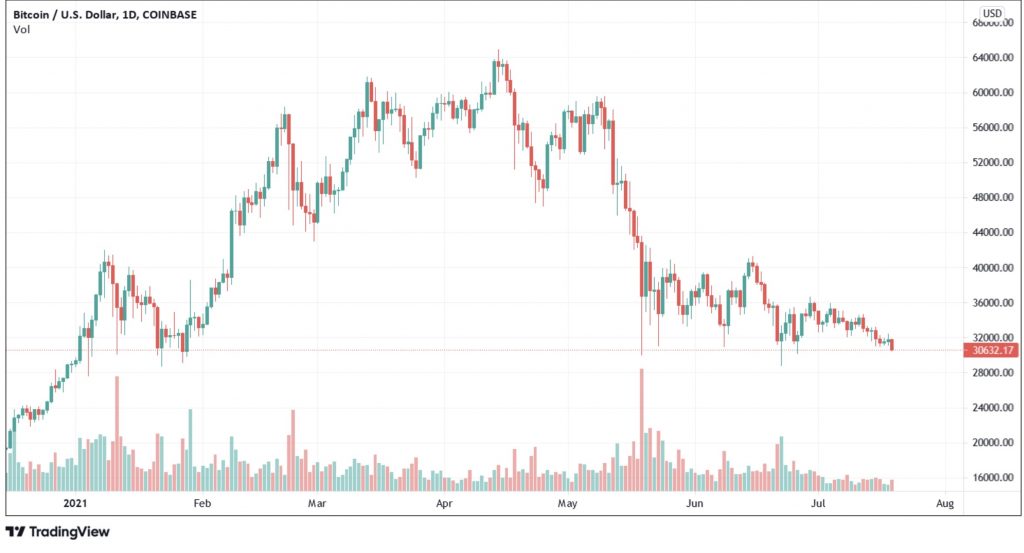 Trading Bitcoin with leverage has expanded

Using leverage to trade is natural for professionals. Leverage is a part of their everyday business activities. For the individual, leverage depends on where they do business and what financial assets they trade.

We’ve previously written about the question of whether you should use leverage to trade Bitcoin. This included the pitfalls of being on the wrong side of a big move and the consequences.

Since then, the market has expanded, and the demand for leverage has increased.

In the broader Bitcoin market, we have a wide variety of players. This includes relatively inexperienced traders who are new to markets.

And this risk-seeking behaviour helps shape how leverage is used in a market like Bitcoin.

It then shapes how advances take place and the violence of declines.

This behaviour is important to understand in the context of your trading.

When you are setting up a trading plan, you have several things to consider.

Risk management is a key component of your trading plan. That is, taking into account the potential downside to your position and then taking steps to protect yourself.

You should have a trading plan that reflects your thought process and expectations for the trade.

Your plan should take into account the narratives driving the market. For example, what appears to drive buying and rallies?

What narratives are the most important?

And how do they create headline risk if they change?

When people are confident about the future, they spend more. When they are fearful or lack confidence, they spend less. Debt and credit rise with confidence and contract with turmoil.

The same applies to trading.

In any market, confidence rises with the market. And confident traders are more risk-tolerant. This means they will likely use larger positions and have wider risk parameters.

Conversely, after a big decline and a washout, traders tend to be less confident. That means they tend to be risk-averse and either trade smaller or not at all. The demand for leverage declines in a risk-averse environment.

Leverage is typically highest when confidence is highest. And this is also where risk tends to be highest.

And we’ve seen how one future Martian can tag a cryptocurrency by picking up his phone.

So when Bitcoin is rising aggressively, confidence rises, and leverage accumulates. That leverage creates downside risk when conditions change.

Then the market goes from confident to FUD.

Then the confidence process begins again, climbing the proverbial wall of worry.

Both events were characterized by a period of optimism and risk-seeking followed by a change in narrative. Then came the liquidations.

Every Bitcoin trader or hodler was affected by the liquidation whether you were using leverage or not.

And it is because of that, you have to consider the impact of leverage in your trading plan.

Now the good news is that if you reframe your thinking, you can find ways to use this to your advantage.

Because when you are starting out, losses can be perceived as a threat. And frankly, if you are all in on one position, that may not be unreasonable.

But the right way to see movement in Bitcoin is through the lens of opportunity.

Bitcoin traders were coming off crypto winter, and some strong infrastructure progress in 2019. Bitcoin had one big catalyst event on the calendar, and that was the halving due in May 2020.

The feeling, coming off a long, painful decline, was cautious but optimistic. The narrative was digital gold and the store of value.

A virus created the perfect storm of uncertainty.

This exposed the leverage in the system as the declining market triggered stop-loss orders. 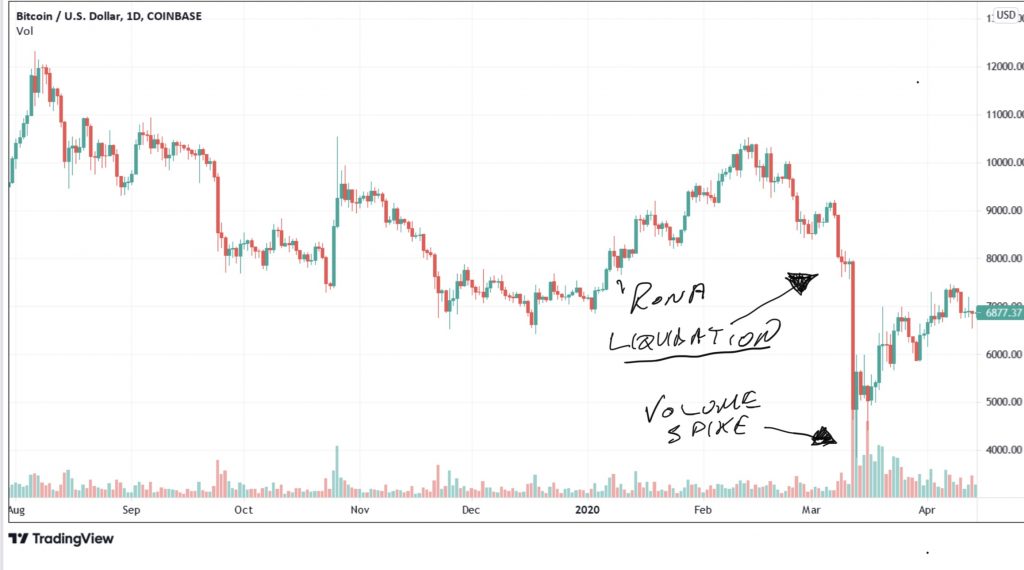 Leverage was relatively new to Bitcoin in 2020. But it suffered an equally punishing fate as selling triggered liquidations on the way down. While the move down and recovery was swift, the impact on confidence was also significant.

But those who looked at this liquidation as an opportunity were able to position and benefit from the recovery that followed.

The evolving Bitcoin narrative into May 2021

Crypto as a whole was expanding its market cap rapidly as it eclipsed $2 trillion.

Confidence was high and expanding along with price predictions.

This set the stage for what followed.

But what got Bitcoin moving in the first place?

Well, once the May 2020 halving was out of the way, Bitcoin started trading sideways.

Then came a series of announcements, the most significant being from MicroStrategy. 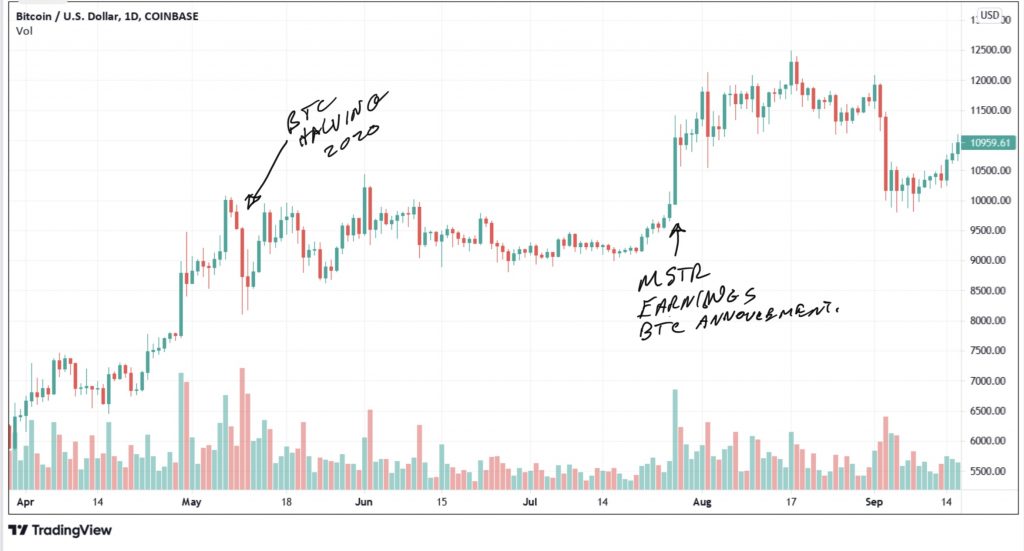 MicroStrategy had allocated a significant portion of their treasury to Bitcoin. And they demonstrated that they were able to accumulate that position without the market knowing.

That is no small feat.

This was a major change in the Bitcoin narrative. This announcement was the equivalent of permission to other institutions.

Following this came a flood of institutional announcements. Each announcement moved the market higher with the occasional hiccup.

Looking for a breakout, technical analysts piled in as it broke through the old blowoff top in 2017.

The price predictions started to go up.

And more traders piled in.

As the trend strengthened, so did confidence and optimism.

That increased risk appetite and the demand for leverage.

And leverage expanded in Bitcoin, contributing to the market’s move higher.

As the Bitcoin announcements continued, one event, in particular, got things rolling again.

That was the public discussion between Elon Musk and MicroStrategy’s Michael Saylor on Twitter. This was followed by Tesla’s announcement of a $1.5 billion position on the books.

Bitcoin launched higher with this news, and confidence became overconfidence.

When this happens, you start to see all the usual behaviours.

Record prices for NFTs were announced as Beeple sold a painting for $69 million bucks worth of ETH. Other headline seekers punted on eye-watering NFT purchases.

When you see these things in the press, you can assume leverage is pretty close to the maximum.

So the narratives that mattered were MicroStrategy’s permission position, big institutional commitment, plus Elon and Tesla.

Then the unthinkable happened.

Tesla as a Bitcoin catalyst to the downside

You will recall that Elon is deeply concerned about the environment. Part of his mission to Mars is to save humanity from climate catastrophe.

Somebody reminded Elon that Bitcoin requires energy to operate its network and proof-of-work infrastructure. So Tesla, one of the key narratives in the latter half of the Bitcoin move, suspended Bitcoin payments for cars.

On the same day, the Chinese came out that they would be cracking down (again) on bitcoin mining. But it would appear that this time they were serious.

The narrative had changed substantially.

The leverage in the system was now vulnerable. It had been built up over the previous six months. It was likely pyramided, using capital gains to add more leverage.

And as the market sold off, it triggered stop-loss liquidation of pools of leverage.

As these pools were blown out, they drove more selling which eventually triggered more liquidations.

All of that leverage was like dry kindling accumulating in the vast forest of Bitcoin confidence.

And Elon became the spark.

The question is, how do you use this situation as a trading opportunity?

Now, looking back at events and saying you would do this or that could be considered a bad case of hindsight bias.

But you can approach this realistically using many of the points we’ve written about here in our education section.

You want to make sure you have a trading plan. And in that plan, you want to consider the most important narratives in your market carefully.

Then you want to consider your risk management. What might happen if this narrative changes? What are the signals I’m looking for?

You will probably want to develop some trading rules to help you manage as the conditions change. The rules should help you in chaotic conditions.

Then you want to brush up on your technical analysis.

What levels on the Bitcoin chart are prime locations for stop losses?

And there are likely several potential pools of stop losses if the advance has been long enough. So any major support level on the Bitcoin chart might have stop-losses right underneath them.

Then it’s time to think about positioning.

This is your trading plan for chaos.

The Bitcoin chart shows you a clear picture of the story. You can see where each important narrative comes in and the result. 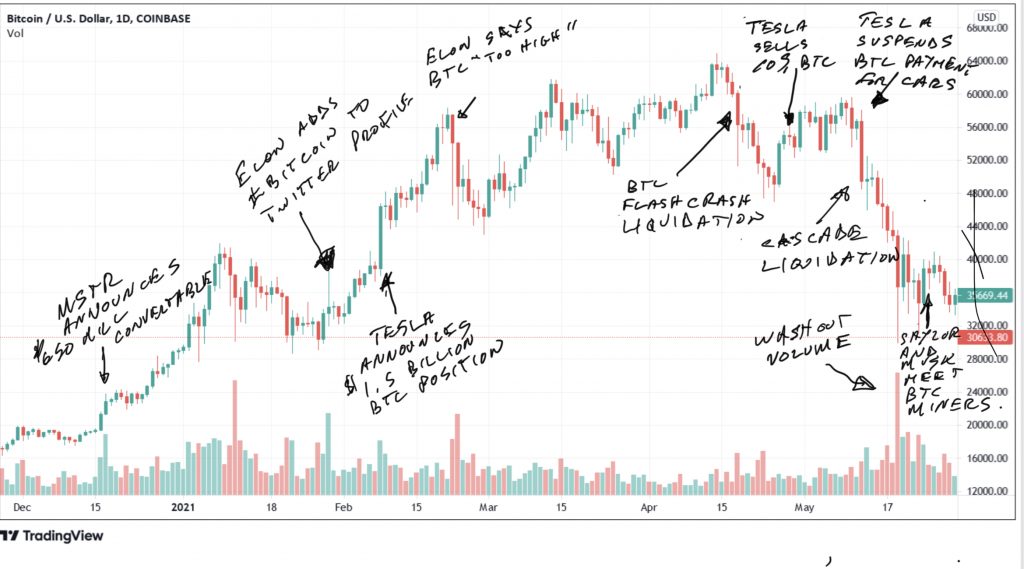 You can see all the support levels below where Bitcoin traded and bounced.

And you can see the impact of liquidation as it cuts through those various levels triggering stops.

The market then goes into a sideways motion shaped by opposing news events.

One lesson is the importance of thinking about market confidence and when to lighten up. This is where you notice yourself spending more time than usual thinking about what you are going to do with all your unrealized digital gains.

The complete absence of fear is almost always a contrary indicator.

Another lesson is that you can use some of your profits to build positions into liquidations.

This is where you can use leverage to your advantage even when you aren’t using it.

You can build trading positions by scaling into liquidations with what are called stink bids.

Stink bids are buy orders that are placed way off the current market price. They are there to take advantage of various market catalysts.

Like when a major narrative changes after a long period of optimism, creating chaotic conditions and steep declines.

Trading is about seeing movement as opportunity. That means that when Bitcoin goes up, there is opportunity. And when it is getting beat up, that is also an opportunity.

But it’s only an opportunity if you have planned ahead for the possibility, so you are ready.

Planning ahead means that you have to look at the market as a context-rich environment.

You have to consider more than just the numbers but the narratives.

And you have to understand your internal feelings and dialogue.

Leverage is part of every financial market, even the decentralized ones. Leverage is simply a reflection of the future expectations of traders and creditors.

And that confidence is almost always cyclical, which means that leverage follows market cycles and shapes them.

What you are doing here is thinking countercyclically.

So, how can you lighten up as things get extreme on the upside so you can take advantage of the change to the downside?

Because leverage is a tool that can work for you even if you don’t use it directly.

Buy, sell and trade BTC, ETH and more on Bitvo’s secure, fast and easy to use crypto trading platform.