For newer digital currency traders, it’s sometimes difficult to keep track of the differences between various coins and tokens. One example: Bitcoin, the oldest and most famous of all cryptocurrencies, shares its name with several other coins, including Bitcoin Gold, Bitcoin Private, Bitcoin Diamond and, the most popular variant of all, Bitcoin Cash.

Yet while these coins share a name, they differ in some key respects you should be aware of before choosing to purchase one of these digital assets.

With that in mind, let’s take a closer look at the key distinctions between Bitcoin and Bitcoin Cash. 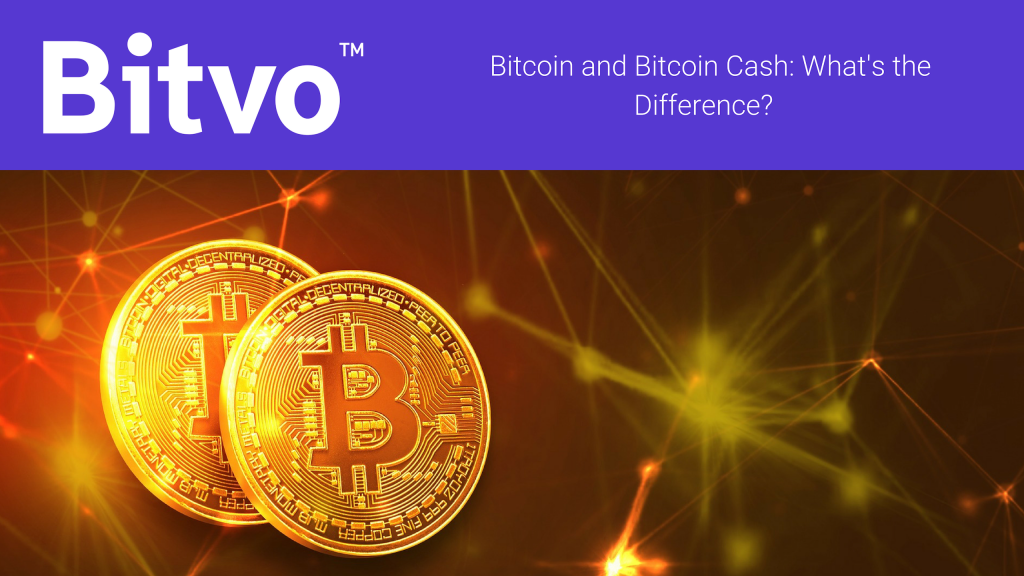 The Beginning of Bitcoin Cash

In order to understand the difference between Bitcoin and Bitcoin Cash, it’s first necessary to grasp the concept of a “fork”. In basic terms, a fork is simply a new version of an existing coin or token that is created by splitting from the original blockchain.

Forks can occur for a variety of reasons, but they are typically undertaken when a group of community members wish to make a change to the protocol of the current chain.

Sometimes these changes are the result of a disagreement over how a digital asset should be developed, exactly the kind of situation that led to the creation of Bitcoin Cash.

Bitcoin Cash was created after an intense disagreement about the future of Bitcoin development split the community. Because Bitcoin transactions take between 10 and 30 minutes to validate, a portion of the Bitcoin community believed the original Bitcoin protocol needed to be changed in order to increase transaction speed. The idea was to make Bitcoin more suitable as a traditional retail currency by increasing the size of the blocks on the Bitcoin chain.

Another group of Bitcoin developers, companies and miners were opposed to making this change. They made a variety of arguments, including reduced decentralization and the notion that increased block size would only be a temporary fix to Bitcoin’s scaling issues.

After attempts to reach a compromise solution failed, the group in favor of larger block sizes launched Bitcoin Cash with a hard fork in the summer of 2017. Anyone who held Bitcoin at the time of the fork was issued an equivalent amount of the new asset, Bitcoin Cash.

Today, Bitcoin Cash is following a development path that emphasizes adjustable block sizes, while Bitcoin aims to accommodate growth through the use of the Lightning Network, a “second-layer” payment protocol that acts on top of a blockchain.

While Bitcoin remains the world’s most prominent and valuable digital asset by market capitalization, Bitcoin Cash has continued to be a top 10 cryptocurrency with a market cap just under $5 billion US.

Since inception (or forking) Bitcoin Cash has become one of the most widely accepted digital assets in terms of consumer transactions, with a transaction capacity about four times greater than Bitcoin. Bitcoin supporters, however, maintain that the Lightning Network will soon give Bitcoin the capability of allowing near-instant transactions.

However, the Bitcoin Cash project experienced its own contentious internal battle over the future development of Bitcoin Cash. Craig Wright and Calvin Ayre, two longtime leaders of the Bitcoin Cash community, led an effort to split the Bitcoin Cash blockchain in the fall of 2018. The resulting split led to the creation of a new digital asset, Bitcoin SV (Satoshi’s Vision), one that Wright said would be closer to original vision of Bitcoin’s anonymous founder, Satoshi Nakamoto.

Bitcoin SV ranks just in behind Bitcoin Cash with a market cap around $4 billion US and close to the same circulating supply as Bitcoin Cash, at 18,3732, 652 BSV.

But fights over the rights to the Bitcoin Cash name between the two parties resulted in some listing symbol confusion. Bitcoin Cash was listed as Bitcoin ABC and is now listed as BCH. Bitcoin SV carries the symbol BSV.

Bitcoin Cash and Bitcoin share both a name and much of the same history. Yet the projects also have a decidedly different approach to future development. By learning about how they differ in their approach to scaling, philosophy and other issues, you can make an informed decision about which currency to use or trade.

to buy, sell or trade Bitcoin and Bitcoin Cash.

Clients also have exclusive access to Bitvo’s Cash Card for easy use of your cryptocurrency gains.