Are Bitcoin and Ether forms of economic strength training?

The economy is in flux, but the market is taking out new highs. The dollar is down, but gold and crypto are up.

We have multiple pandemics in COVID, mental health, and senicide.

In Canada, lots of people are on the CERB. But they haven’t realized that those jobs that were there before will be gone as businesses learn to operate more efficiently. Or disappear altogether.

Images of Times Square look like a dystopian Hollywood thriller. The only thing missing is Will Smith.

Governments are in turmoil, and many may fall in the months ahead as the reality of cash and purpose starved citizens hit home. Central banks are using their power liberally to keep the markets lubricated with resources.

Then comes the narrative of the failing dollar, for the umpteenth time.

In periods of flux, new ideas hidden from view come to the surface. During periods of economic and financial atrophy, there is a need for training. And it is here that Bitcoin, Ether, and the cryptocosm provide the strength training required for tomorrow’s economy. 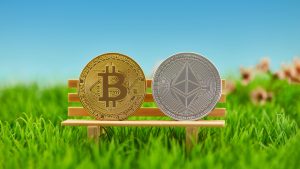 A strong, durable body like a strong economy requires a mix of challenges and rest. A mix of strength training and aerobic activity, in the right doses, will result in fitness and health.

An economy requires a mix of large and small businesses – a blend of ideas within a structure,  allowing for surprise and experimentation while preserving a set of standards.

But what if you find yourself confined to a bed?

The human body will decondition if confined to a bed for any length of time. Muscle and tendons will quickly atrophy and become weaker. After a few weeks, depending on the condition you were in before bed rest, you may have to learn to walk again.

Now imagine an economy on the equivalent of bed rest for five months.

The atrophy of skill

Skills start to atrophy as people are confined to their former homes that are now gyms, restaurants, workspaces, a retreat from the world, school, and play area, all wrapped in one.

The driver avoiding their car for months will have reduced capacity to drive.

The surgeon, without patients to fix, will lose some of their previous efficiency.

Social skills, normally used with ease and with proper restraints, are untethered on social media.

As businesses fail, optimism about the future, declines.

But the future can be better than the past, all that’s needed is some training. Something to reverse the atrophy. A sign of hope and potential.

That’s where Bitcoin, Ether, and the cryptocosm come in.

Throughout the economy’s long period of bed rest, technology continued to plug along. In fact, it’s hard to imagine the possibility of a shutdown scenario without technology.

Large tech companies have stepped up in significant ways. Some more positive than others. And crypto experimentation has continued unabated.

The progress continues along with the failures. Some people have been creamed in Yam, and ETC has had numerous problems. DeFi has continued to progress with various hiccups.

Bitcoin got through its initial leveraged trading experiment in March and the halving in May to build constructive momentum.

Ethereum has stepped up by providing the foundation for a growing and increasingly prominent smart contract and stablecoin enterprise.

The token market has embraced the small-cap frenzy of old school penny stocks. Some are venture exchange material, others pink sheet specials destined for extinction.

All of this activity, stress and discomfort is a form of training.

As free people trade and test each and every protocol, learning and discovery are accelerated. Every failure is information. Every trade made, protocol tested and expanded is skill development.

These crucial skills are being accumulated and developed across numerous areas simultaneously.

Crypto mining is driving technology development and energy efficiency. Grid management is being instituted as a result. New financial products will be created to support mining as institutional investors enter the market.

Custody is now legal across the US banking industry. And Central banks want in on the crypto action with their own CBDC payment rails.

Various exchanges are developing as a network of international liquidity pools in a decentralized system.

Networks are expanding as bandwidth and storage increase and become cheaper.

Crypto is driving a new interest in money and financial literacy. It’s not just about having money, it’s about producing things.

People are discovering personal agency where they can win and lose based on their own judgement. And the very public nature of the network punishes known scammers quickly.

All of this is training for the economy and financial system required tomorrow.

A lower dollar isn’t a negative

Crypto won’t supersede the existing system through the failure of it. The current system remains functional. The blood doesn’t stop moving around a body and into cells because it’s stuck in bed.

The press seems to revel in the stories about the falling dollar. But they only have to look back over the last twenty-five years to see that this claim lacks merit.

A weakening dollar provides relief to these countries and their people in a time of need.

Besides, the Japanese have printed yen for over 30 years without the predicted total collapse. Yet.

Time to build strength and skills for the new economy

In his book, Doing Capitalism in the Innovation Economy, William Janeway describes good bubbles and bad bubbles. A good bubble is a place where liquidity events can be exercised regularly and capital redeployed. During these periods, massive amounts of infrastructure are developed, often at high prices. Many builders will fail, but the assets and learning will remain.

Many of these assets were simply early or overpriced based on the situation. Throughout 2020, the crypto infrastructure has continued to be developed. A lot of overpriced ideas have failed. And many of these are likely too early.

But like any great training program, it is this work that builds strength and resilience required for the future. It is the metaphor of breaking down of muscle and providing rest for it to rebuild and adapt.

Crypto has been tested under severe conditions, and survived, even thrived without direct government intervention.

These tests, trials, and tribulations are the training necessary for the next phase of the economy.

Because when the smoke clears, a lot of things won’t be the same.

Lots of reputations will be destroyed. Credit scores ruined. Businesses culled through no fault of their own.

The importance of agency, choices, and personal responsibility will be crystal clear.

And that means embracing the cryptocosm, while building the skills, strength and capability for the next phase of our economic growth.

The future is bright.

Want to know more about trading? Check out our extensive education section.